Seat sharing still a tricky issue for Sena and BJP

The BJP now wants its ally to contest seats they won last time and to equally distribute the remaining 103 seats. 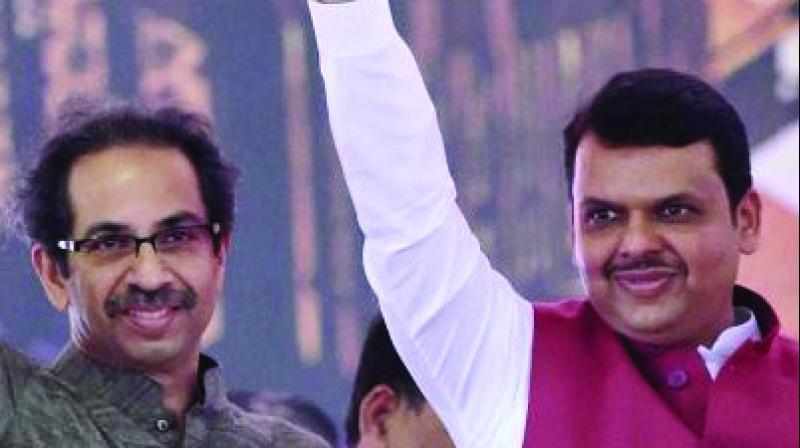 New Delhi: As the ruling partners Bharatiya Janata Party (BJP) and its Shiv Sena starts preparing the ground to resolve the contentious seat sharing formula for the coming Maharashtra Assembly polls, the former’s camp is abuzz with rumours that its leadership could insist on retaining the seats it won last time and equally distribute those Assembly seats which both failed to win during the last polls.

Of the 288 assembly seats, the BJP had won 122 and the Sena bagged 63 seats during the last elections when they had contested separately. The BJP now wants its ally to contest seats they won last time and to equally distribute the remaining 103 seats.

It was the unresolved seat sharing formula which had led the two allies to contest the last polls separately, though the Sena later joined the BJP-led government in the state with the first BJP chief minister Devendra Fadnavis.

The BJP cadre, sources said, is not in favour of giving up seats the party had won last time and said that only those seats which both allies could not win, should be considered while finalising the seat sharing formula.

Also, the BJP has clarified to its cadre in the state, that the chief minister’s post is “non negotiable” and the post will not be on a “sharing basis” as suggested by some Sena leaders.

The BJP leadership, also told its cadre that poll preparedness should be in “all 288 Assembly seats,”  indicating that the saffron party leaders are not worried about the rumours that the Sena would contest separately if its conditions are not agreed.