Sena slams Yogi govt, says there is Jungle Raj in UP 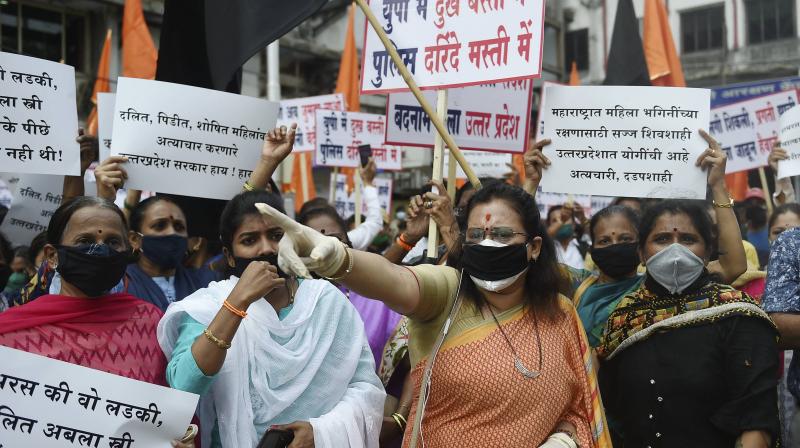 Shiv Sena party supporters shout slogans during a protest against the Uttar Pradesh government over the death of Hathras victim, outside Churchgate Station in Mumbai. — PTI photo

The Shiv Sena on Saturday slammed the BJP led Uttar Pradesh (UP) government over Hathras gang rape stating that there is no ‘Ram raj’ but ‘Jungle raj’ in Uttar Pradesh. The atrocities against women, murder and rape of girls have increased during chief minister Yogi Adityanath’s regime, the Uddhav Thackeray-led party said.

An editorial in the party mouthpiece “Saamana” said that the victim was saying that she was raped, but the Yogi government said that there is no substance in it. Post this incident, a gang rape was reported in Balrampur. But neither the Central Government nor UP government expressed any grief.

“"A 19-year-old woman in Hathras was raped and murdered, which triggered an outrage across the country. In her dying declaration, the victim said that she had been raped. But the UP government now says that she was not raped. Soon after, an incident of gang-rape also took place in UP’s Balrampur. But despite all this, neither the rulers in Delhi nor the Yogi Adityanath government were moved. The government itself says that when there was no rape, why is the opposition crying hoarse. But if the woman was not raped, why did the police cremate her in the dead of the night?” the Saamana editorial asked.

Slamming its erstwhile alliance partner, the Shiv Sena said that BJP spokespersons went to town over TV channel debates in the Sushant Singh Rajput death case. “But the same people are now saying that the Hathras victim was not raped. The victim’s dying declaration has no value! The country was never so lifeless and helpless in the past,” the editorial said.

The UP police stopped Congress leader Rahul Gandhi from visiting the grieving family in Hathras, it said. “Mr Gandhi was caught by a collar and pushed to the ground. Humiliating a leader of a prominent political party in such a manner is a gang-rape of democracy,” it said.

The Sena further alleged that Yogi government had issued an instructions to “face consequences if anyone raises voices against the atrocities of women and rape”.