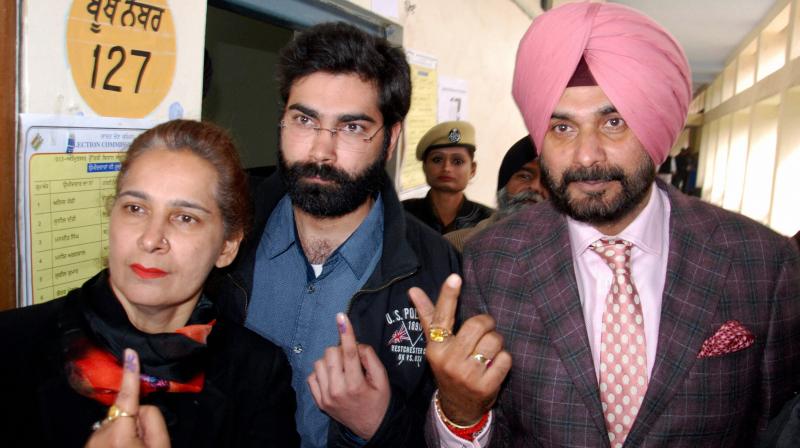 Congress candidate Navjot Singh Sidhu, along with his wife Navjot Kaur and his son, after casting their votes at a polling station in Amritsar. (Photo: PTI)

Amritsar: Cricketer-turned-politician Navjot Singh Sidhu on Saturday allegedly violated the model code of conduct as he along with his family, entered the premises of a polling booth in private cars here, for casting vote.

As per Election Commission guidelines, nobody could move in the polling booth premises along with their vehicles, except handicapped or physically challenged persons.

Mr Sidhu and his family, who were moving in three different SUV cars, were stopped at the main entrance gate of the polling booth by the paramilitary forces. But he gained entry by saying that he was carrying special permission to go inside along with the vehicles.

On being contacted, Deputy Commissioner-cum Returning Officer Basant Garg said that a complaint has been received in this regard.

“We are verifying the facts by checking the CCTV footage,” Mr Garg said.

“If legitimate proof proves that his vehicles were found inside the premises, action will be initiated as per the guidelines of Election Commission of India. Sidhu was not permitted to go there along with his vehicles,” Mr  Garg said.

His residence falls in the Amritsar North constituency. His wife Navjot Kaur had won the elections from Amritsar East during the previous assembly polls on BJP ticket.