Sasikala Natarajan set to be CM of Tamil Nadu

Following the demise of our Amma, it was O Paneerselvam who urged me first to take charge as the General Secretary of AIADMK. 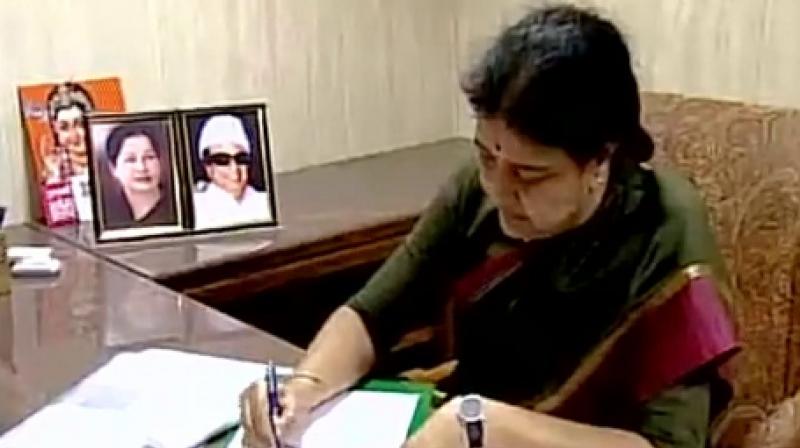 Chennai: Ending days of speculation, the AIADMK on Sunday, announced the elevation of party general secretary Sasikala Natrajan as the next Chief Minister of Tamil Nadu.

Addressing a meeting of AIADMK MLAs at the party headquarters, Sasikala said, “Following the demise of our Amma, it was O Paneerselvam who urged me first to take charge as the General Secretary of AIADMK. It was Paneerselvam who insisted first, that I become the Chief Minister of the State.”

"Party workers had said that the Legislative Assembly leader and the Chief Minister have always been the same I accepted the post as per their wishes, to fulfil the ambitions of Amma," Sasikala said.

According to reports, Pannerselvam submitted his resignation to Sasikala, following which she was elected as the head of AIADMK Legislature Party.

He had also arrived at the Poes Garden Residence to meet Sasikala prior to the meeting.

"Chinnamma all set to become the next Chief Minister of Tamil Nadu," AIADMK said in a tweet.

In December last year, within a week of Panneerselvam taking over as CM, four state ministers had asked Sasikala to become the Chief Minister, besides being the AIADMK General Secretary. Later it was followed by other MLAs, besides party leaders at the state and district level.

Despite the disproportionate wealth case hanging like a Damocles sword over Sasikala, there were speculations that she would become the CM before Pongal or immediately after the festival. But the month of January had passed and there was a brief lull in such speculations and demands for Sasikala assuming CM post.

A resolution to this effect was passed at a meeting of Tirunelveli Urban Jaya Peravai (Forum), led by state AIADMK secretary and revenue minister R B Udhayakumar on December 17.

On February 3, Sasikala had appointed senior leaders, including some former Ministers and a former Mayor, to key party posts.

Earlier, Rajya Sabha MP Sasikala Pushpa and AIADMK leader KC Palaniswamy had complained to the Election Commission (EC) that Sasikala's appointment as the party's interim general secretary had been carried out in an undemocratic manner. The Election Commission issued a notice to the AIADMK, seeking clarifications in this regard.

Sasikala, J. Jayalalithaa's closest aide since the 1980s, had handled party affairs on several occasions despite not holding any formal position in the AIADMK prior to the former chief minister's death. She is called ‘Chinnamma’, meaning aunt, taking after Jayalalithaa - who was popularly known among her legions of supporters as Amma (or mother).

Sasikala will be the third woman Chief Minister of Tamil Nadu after Janaki Ramachandran and Jayalalithaa.

Sasikala said it was Panneerselvam who had for the first time urged her to become both the party General Secretary and Chief Minister after the demise of Jayalalithaa.

"I was, however, not in a mood to listen to anything then due to the passing away of Amma," she said, adding, she agreed to become the party General Secretary after leaders and cadres persuaded her to do so to fulfil the ideals of Jayalalithaa.

Recalling that party leaders and workers had been urging her that "both the party general secretary and Chief Minister should be one and the same person (Sasikala), she said "I am accepting it."

"I will fuffil the dreams of Amma fully and I give my assurance that this regime will work for the people," Sasikala said with her eyes moist.

Panneerselvam was the stop gap Chief Minister twice, first time when Jayalalithaa was unseated following a Supreme Court order in 2001 and when she was convicted in a disproportionate assets case in 2014.

When Jayalalithaa was at the helm, Sasikala was considered to yield a huge clout behind the scenes. After taking charge of the party, she had pledged to take forward the legacy of the former Chief Minister.

Ever since Jayalalithaa's death, there has been a clamour that Sasikala should follow the earlier practice of both the party General Secretary and the Chief Minister's post being vested with the same person.

Senior party leader and Lok Sabha Deputy Speaker M Thambidurai is among those who have backed Sasikala for the Chief Minister's post.

A resolution to this effect was passed at a meeting of Tirunelveli Urban Jaya Peravai (Forum), led by state AIADMK secretary and revenue minister R B Udhayakumar on December 17.

Two days back, Sasikala had appointed senior leaders, including some former Ministers and a former Mayor, to key party posts.

Reacting to today's development, DMK Working President and Leader of Opposition MK Stalin dubbed the elevation of Sasikala as against the "wishes" of both Jayalalithaa and the expectations of the people.

When she addressed the party legislators, Sasikala was clad in the signature green sari and blouse emulating the late Jayalalithaa.

Sasikala's elevation saw her supporters celebrating it by bursting crackers and distributing sweets at many places. It is now a mere formality for Panneerselvam to resign from the Chief Ministership, paving the way for Sasikala to assume the top post.

Stalin claimed Sasikala was not Jayalalithaa's choice for position either in the government or in the party.

Speaking to reporters at Tiruvarur, the DMK leader recalled that whenever Jayalalithaa could not be at the helm as when she was indisposed since last September and after being convicted in a disproportionate assets case, she chose Panneerselvam to head the government.

He said his "party will face it in the upcoming elections (civic) in a democratic manner."

"I believe she will factor in people's opinions on this change," he said in a statement.