In Delhi, TMC spokesperson Derek O’Brien said that 22 parties have extended their support to the protest against the Centre. 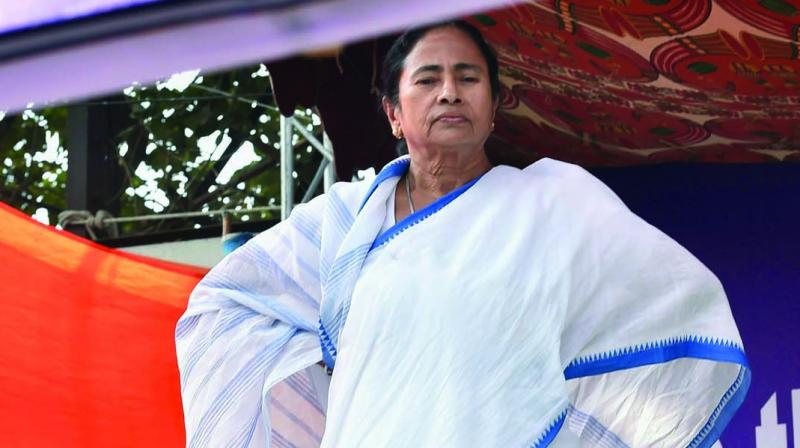 Kolkata/New Delhi: Doing what she is best at, West Bengal chief minister Mamata Banerjee on Monday escalated her street fight against the Centre and the CBI by vowing to continue her “satyagraha” to save the country and the Constitution till February 8 amid a tsunami of support from Opposition parties.

Fuelling her prime ministerial ambition, Ms Banerjee tactically pitched herself to the forefront of a united Opposition, whose leaders tore into the Central government on the floor of Parliament and outside.

The high-voltage political drama continued on the eve of a crucial hearing in Supreme Court on Tuesday wherein the CBI is likely to present proof in chit fund scams to support its plea seeking permission to question Kolkata police chief Rajeev Kumar in whose defence Mr Banerjee has come out in the open, triggering the confrontation with the Central government.

The CBI has accused Mr Kumar of evading questioning and being a “potential accused” in the Saradha and Rose Valley Ponzi schemes, which allegedly involve leaders of Ms Banerjee’s Trinamul Congress. The probe agency told the court it is possible that he might have tried to destroy evidence. A red diary and a pen drive allegedly handed over to Mr Kumar’s team as evidence are reported to be missing.

The Supreme Court earlier said there is not one evidence shown by the CBI in its application to back the claim that the police commissioner is attempting to destroy electronic evidence.

While Ms Banerjee continued her dharna at Metro Cinema in Esplanade, central Kolkata, the TMC claimed it has the support of almost all Opposition parties, an indication that the West Bengal chief minister is aiming at nothing less than the Prime Minister’s chair with a virtual replay of her January 19 Kolkata rally.

“This is a satyagraha and I’ll continue (it) till the country is saved... Constitution is saved,” a combative Ms Banerjee told reporters at the protest site, escalating her confrontation with the Narendra Modi government, a day after an all-out war broke out between the two.

Describing her stir as “non-political”, Ms Banerjee said, “It’s not a political programme. But all political parties can join us in our protest.”

In Delhi, TMC spokesperson Derek O’Brien said that 22 parties have extended their support to the protest against the Centre.

The TMC chief is understood to have also got phone calls from SP chief Akhilesh Yadav, BSP chief Mayawati, Mr Kejriwal and Mr Naidu, he said.

Pointing to the non-political nature of the dharna, Mr O’ Brien said, “There is not even a single TMC flag at the protest site.”

In the Lok Sabha, Union home minister Rajnath Singh called the developments in West Bengal “unfortunate and unprecedented” and indicative of a constitutional breakdown.

“There may be breakdown of Constitution in West Bengal... Under the Constitution, the Central government has been vested with the power to maintain normalcy in any part of the country,” Mr Singh told the Lok Sabha.

“Whatever happened on Sunday indicates constitutional breakdown,” he said as a host of Opposition parties threw their weight behind the feisty West Bengal leader.

TMC MP Kalyan Banerjee alleged that the home minister is hiding facts from Parliament. He claimed the Kolkata high court had stayed the summons issued by the probe agency to Kolkata police chief till February 13.

Both the Houses were disrupted and eventually adjourned over the issue.

The ruling BJP, meanwhile, alleged that Ms Banerjee is on a dharna to save herself from the CBI which is probing the chit fund cases as per the orders of the Supreme Court.

Union minister and Asansol MP Babul Supriyo demanded that President’s rule be imposed in the state as he accused Ms Banerjee of aligning with those indulging in corruption.