He claimed that out of fear of the Adityanath government, criminals are running to police stations to surrender 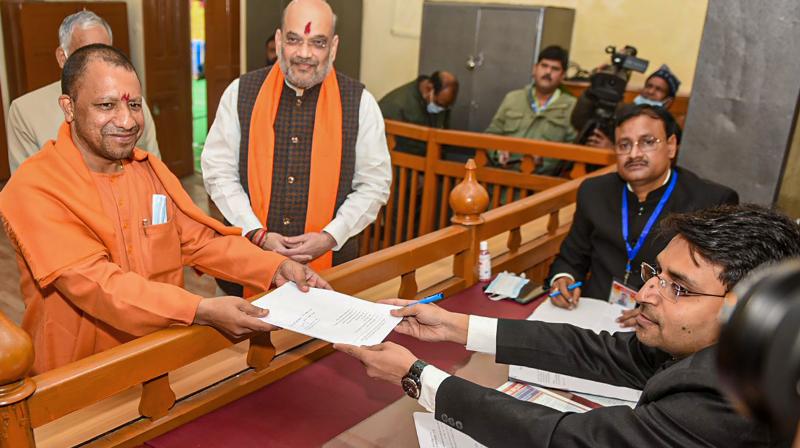 Gorakhpur: Union Home minister Amit Shah on Friday credited Uttar Pradesh CM Yogi Adityanath with freeing the state from criminals, who he said can now only be found in jails or Samajwadi Party's candidate lists for the Assembly polls.

The BJP leader made the remark at an election rally here, after which he accompanied Adityanath to the collectorate, where the chief minister filed his papers for the Assembly polls from the Gorakhpur Urban Assembly segment.

The Assembly seat is part of the Gorakhpur Lok Sabha constituency, which Adityanath represented in Parliament five times.

Besides top BJP leaders, chiefs of allies Apna Dal and NISHAD Party were present on the occasion.

"I can say with pride that Yogiji has freed UP from mafias. He has established the rule of law in true sense after 25 years in the state," Shah said praising the CM at the rally.

The Union home minister mockingly said now criminals can only be found at three places--jails, out of UP and in the candidate lists of the Samajwadi Party.

He claimed that out of fear of the Adityanath government, criminals are running to police stations to surrender.

Taking a swipe at the Samajwadi Party (SP), he said the days of Azam Khan, Atiq Ahmad and Mukhtar (Ansari) are over and they cannot frighten people any longer.

Shah said earlier Gorakhpur was known for criminals and deaths due to encephalitis disease.

Now, alphabet G in its name stands for Ganga Expressway, O for organic farming, R for road, A for AIIMS, KH for khad' (fertiliser) and karkhana' (factory), PU for Purvanchal Expressway and R for regional medical research centre."

Shah praised Prime Minister Narendra Modi for ushering in development in UP.

"Modiji started 73 schemes for the poor and women," Shah said.

Yogiji provided pulses, oil and salt with a 5-kg free ration every month to every poor, he said.

Speaking on the occasion, Adityanath praised Shah for the scrapping of Jammu and Kashmir's special status and building of the Ram temple in Ayodhya.

He praised Shah for his astute election strategy, which resulted in a massive victory for the BJP in General Election of 2014 and 2019.