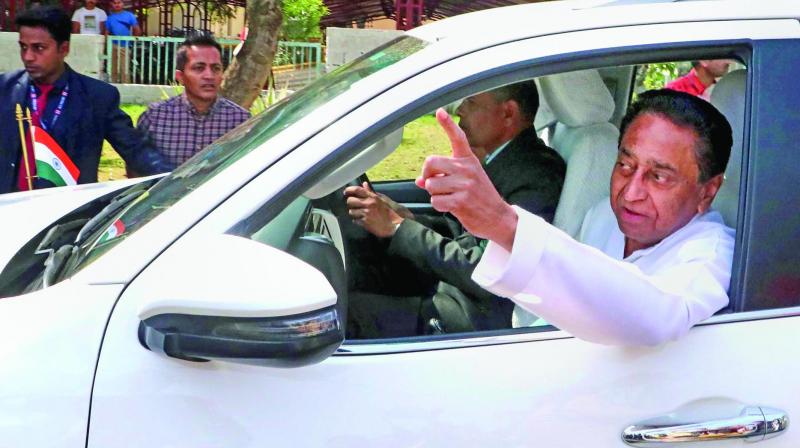 Madhya Pradesh chief minister Kamal Nath leaves after a meeting with party MLAs and others in Bhopal on Wednesday.(Photo: PTI)

Bhopal/New Delhi: In a mid-night drama on the intervening night of Tuesday-Wednesday, 10 MLAs of the ruling party in Madhya Pradesh did a disappearing act. While six were finally located and “rescued” from a hotel in Gurugram, Haryana, by senior party leaders, four are still missing, putting the state government on the edge.

Some Congress leaders blamed the Bharatiya Janata Party of using its money power to topple the government, but many said that it was simply a tussle between two Congress leaders for Rajya Sabha nomination.

Senior Congress leader Digvijay Singh, who was part of the “rescue party”, was the first to point a finger at the Bharatiya Janata Party (BJP), saying it was trying to poach MLAs and topple the Kamal Nath government.

But Congress leaders in the state, who appeared confident about the stability of the government, said the party is supposed to get two seats out of three in the upcoming Rajya Sabha polls on March 26 and a feud is on within the party on the likely claimants.

Digvijay Singh is a sitting RS member and is retiring later this month.

The Congress state leadership, i.e. chief minister Kamal Nath, is keen on inducting a local leader for one of the seats, leaving the fight open between Digvijay and Scindia for the one seat left.

It was Digvijaya Singh, along with his son, state minister Jaivardhan Singh, state finance minister Tarun Bhanot and Pradesh Congress chief Jitu Patwari who rescued the six MLAs from a hotel in Manesar, Gurugram, in a “late night raid”.

Mr Patwari alleged that the 10 MLAs — who included two Bahujan Samaj Party (BSP) MLAs, one Samajwadi Party (SP) legislator and two Independents — were being “held hostage” by the BJP in a Gurgaon hotel, and were being wooed with the offer of money to dislodge the Kamal Nath government.

Mr Scindia also accused the BJP of poaching legislators, but asserted that the Congress government in the state was completely secure and stable.

The MLAs, who were apparently brought to Delhi on a chartered flight, were flown to Bhopal in a charter plane and taken to the chief minister’s official residence in the state capital for a meeting.

The chief minister and AICC general secretary in-charge of MP affairs Deepak Babaria had a long discussion with the six MLAs. The meeting was going on till last reports came in.

The six MLAs who were flown back to Bhopal are Andel Singh Kansana and Ranveer Jatav (both of Congress), Rama Bai and Sanjeev Kushwaha (both of BSP), Rajendra Shukla of SP and independent MLA Kedar Dawar.

The fate of the other four MLAs was still not clear with some Congress leaders saying they have been flown to Karnataka by the BJP and others claiming that they are back in MP.

A senior Congress leader here said four other MLAs — Raghuraj Kansana, Hardeep Singh Dank and Baishahulal Singh (all of Congress) and Surendra Singh Sera — have already been contacted by the party’s leaders and are being brought to Bhopal soon.

The Congress has a tenuous majority in the 230-member state Assembly with only 114 seats and relies on the support of independents and BSP and SP MLAs to pull it through.

The Congress-led state government has the support of four Independent MLAs, two Bahujan Samaj Party legislators and one Samajwadi Party MLA. Two seats are currently vacant following the demise of a Congress and a BJP legislator.

The BJP has 107 MLAs in the state Assembly.

“The MLAs were literally kidnapped and kept in a hotel in Haryana. They were now released. All these MLAs are with us and fully back the chief minister. The conspiracy to topple Kamal Nath government by BJP has been foiled”, he added.

Though many Congress leaders, who did not wish to speak on record, said that the “kidnap drama” was part of the jostle for Rajya Sabha seats, a telling giveaway about sentiments in the state unit was a tweet by Umang Shinghar, a minister in the state Cabinet.

“All is well in the Kamal Nath government, this is just a drama for going to the Rajya Sabha,” he tweeted in Hindi.