Forty one out of the 58 members elected/re-elected to the Upper House in elections last month had taken oath on Tuesday. 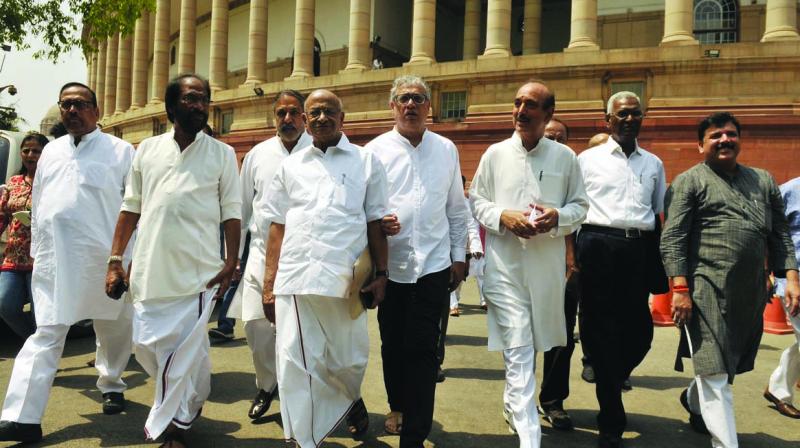 New Delhi: With just two days remaining for Parliament’s budget session to conclude and both the Houses hardly being able to transact any major business due to opposition parties protest over various issues, leaders of more than a dozen Opposition parties on Wednesday met Rajya Sabha Chairman M. Venkaiah Naidu and Lok Sabha Speaker Sumitra Mahajan to demand a discussion on key issues of national importance. The Congress suggested that it would not mind if the session was extended by a day or two as on issues like the SC/ST Act, the CBSE paper leak and the PNB bank fraud need to be debated.

While the Rajya Sabha witnessed 11 adjournments before it was adjourned for the day, the Lok Sabha proceedings were disrupted for the 20th consecutive day due to protests by AIADMK members seeking early constitution of the Cauvery water management board. Before its first adjournment, actor-turned-parliamentarian Jaya Bachchan, BJP’s Bhupendra Yadav along with 10 other newly elected or re-elected members of the Rajya Sabha took the oath of office. Forty one out of the 58 members elected/re-elected to the Upper House in elections last month had taken oath on Tuesday. However, finance minister Arun Jaitley is yet to take the oath.

As both Houses of Parliament were disrupted for the 20th day, opposition leaders, including from the Congress, BSP, SP, DMK, NCP, TMC and the Left parties, met to discuss the lack of debate. “We want to hold discussions on key issues of national importance and we also want to pass legislation. The government should take the lead in doing do. We are not averse even if the session is extended by a day or two,” said Congress leader Ghulam Nabi Azad.