I love Narendra Modi; no anger, hatred towards him: Rahul in Pune

Rahul Gandhi said he has got courage to be what he is today from accepting the truth and works on the basis of truth. 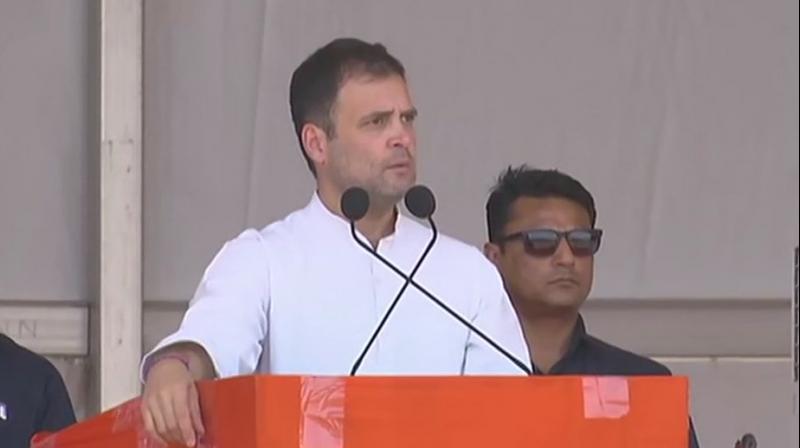 Congress president Rahul Gandhi on Friday interacted with a group of students in Pune. (Photo: File)

Pune: Congress president Rahul Gandhi on Friday interacted with a group of students in Pune where he said that his courage comes from accepting who he is and subsequently working on that realisation.

“From truth comes humility, from humility comes courage. I don’t like to make excuses and am persistent. I stand up for people who are weak, like farmers,” said Rahul Gandhi.

When asked about the educated youth being underemployed and underpaid, Rahul Gandhi stated the link between university education and businesses is needed. “27,000 jobs are being lost every 24 hours in India because we do not respect a person’s capability,” he added.

The Congress chief promised to reserve 33 per cent seats in Parliament, Assemblies for women if his party was voted to power.

The Opposition party has said if voted to power, it will give Rs 72,000 per year as minimum income to 20 per cent of poor families, benefiting around 25 crore people. Gandhi termed the move as 'surgical strike' on poverty.

"Money won't be taken from the middle class and income tax won't be raised," Gandhi said, when asked how funds would be generated for the Nyuntam Aay Yojna (Nyay) scheme.

Interacting with students here, the Congress chief said all calculations have been done to fund the scheme. He said the Congress manifesto was prepared after taking inputs from all sections of society, including farmers and the poor.

Attacking the Modi-led BJP government, Rahul said demonetisation was a disastrous idea. It had a terrible effect on the economy as millions of jobs were lost and the economy was jammed shut.

"We want to give access to young entrepreneurs to the banking system and loans. We will do away with permissions for three years for businesses, which is part of our manifesto. Twenty two lakh government jobs are vacant. We will increase expenditure on education and health," he added.

Talking about the airstrike by the Indian Air Force (IAF), Rahul said, "IAF should get credit for the recent air strikes. I am against the politicisation of the air strikes, I feel uncomfortable when the PM politicises these issues."

While signing off from the event, Rahul said he loved Narendra Modi and had no anger or hatred towards him.