Priyanka took a step forward and ensured best selfies for supporters by clicking them herself. 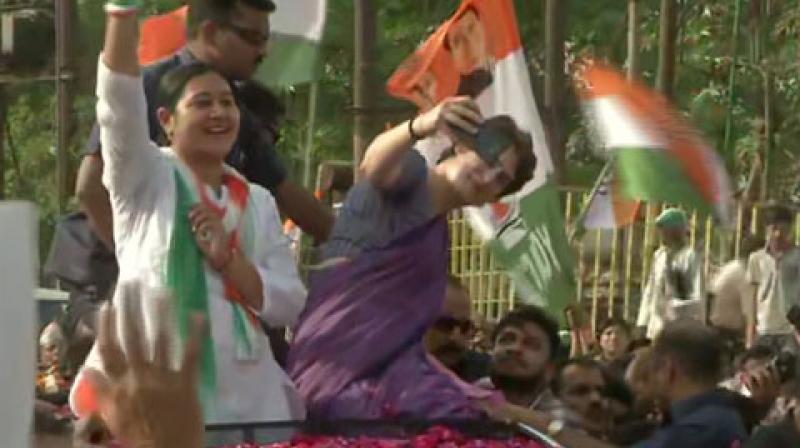 Priyanka Gandhi kept taking mobile phones of the supporters whoever requested for selfie and obliged them. (Image: ANI)

Ghaziabad: Congress general secretary and in-charge of eastern Uttar Pradesh Priyanka Gandhi Vadra wooed the voters of Ghaziabad by clicking hundreds of selfies throughout the long road show in Ghaziabad on Friday.

While it is not very uncommon for politicians to oblige with selfie requests from supports, Priyanka took a step forward and ensured best selfies for supporters by clicking them herself.

Sitting atop a white SUV, Priyanka made the best use of the vantage point. It was a chance to create a personal bond with supporters and Priyanka did not miss it. She kept taking mobile phones of the supporters whoever requested for selfie and obliged them.

Campaigning for Congress candidate from Ghaziabad parliamentary constituency Dolly Sharma, Priyanka's convoy passed through alleys of the city amid a sea of supporters, many of them holding Congress flags and raising slogans in support of the party and its leaders.

Amid a large number of flags, a single large cut-out of Rafale also stood out prominently as it kept moving close to Priyanka's vehicle for quite some time.

People kept showering rose petals from roof-tops at different places as she kept waving and greeting the people lined on both sides of the road as well as on the roofs of different houses and shops.

Priyanka Gandhi Vadra is constantly busy campaigning ahead of the Lok Sabha election, however, this was her first road show in this part of Uttar Pradesh.

She had yesterday accompanied her brother and Congress president Rahul Gandhi while he filed his nomination papers for the Wayanad Lok Sabha seat on Thursday.

The Lok Sabha election to 543 seats is scheduled to be held in seven phases beginning April 11 and concluding on May 19. The counting of votes will take place on May 23.