The FM said Article 370 of the constitution is not compromised in anyway through this presidential order. 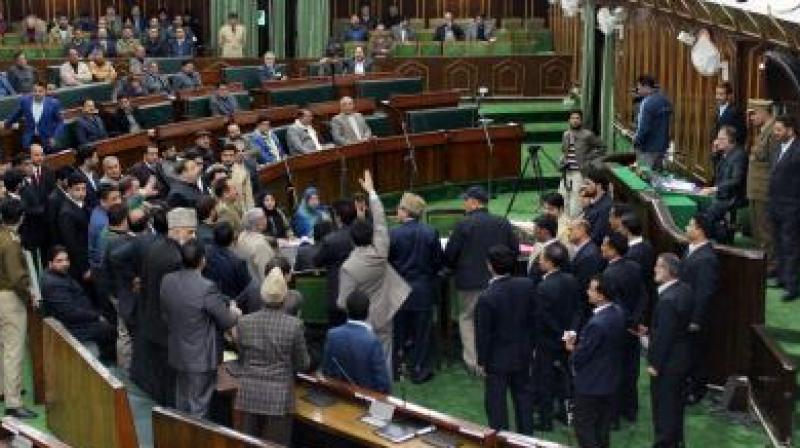 Srinagar: Amid ruckus and intense protests by the opposition members, the Jammu and Kashmir Legislature on Wednesday adopted a resolution for implementing Goods and Services Tax (GST) in the state.

Later, Chief Minister Mehbooba Mufti convened an emergency meeting of the State Cabinet to discuss and give concurrence to the 101 Constitutional Amendment Act of the Indian Constitution under which the GST would be made applicable to J&K as well.

The GST rolled out in the country from July 1 midnight but J&K is the only state that failed to keep date with it.

In view of special status accorded to it under Article 370 of the Constitution, J&K has to pass special laws to make the umbrella tax that has subsumed a string of taxes into one consolidated tax applicable to the state.

The opposition and trade bodies had publicly vowed to fight any move that would weaken further J&K’s special status guaranteed under Article 370 of the Indian Constitution.

They also said that GST would also cause “irreparable financial losses” to the state. A general strike called by Kashmir Inc against the GST disrupted normal life across the Valley on Wednesday.

Ignoring stiff opposition from various political parties including National Conference (NC), Congress and the CPIM and outside the House by traders’ bodies, Finance Minister Haseeb A Drabu had on Tuesday moved a resolution on the floor of the Assembly.

It read, “This House resolves that the government of J&K may give consent to the adoption of the GST regime by application of relevant amendments made to the Constitution of India in a modified manner to safeguard the existing special constitutional position of J&K in the Union of India and legislative powers under the constitution of J&K”.

Works Minister Naeem Akhter placed a copy of the resolution before the Upper House of the State Legislature simultaneously.

“I assure you the state will enjoy overriding powers on issues. We shall have our own appellant authority. Also all exemptions, remissions and subsidies across sectors will remain intact,” he said.

The resolution on GST was passed by both the Houses of Legislature amid assurance from the finance minister that it would be implemented under the ambit of Article 370.

He also said that adequate safeguards for the State’s Special Status and protecting Consolidated Fund and special taxation powers of the State Government are proposed to be incorporated into the Presidential Order for bringing Jammu and Kashmir under the ambit of the new tax regime.

Responding to the concerns of the legislators, he said that under no circumstances will the state government amend the Section 5 of Constitution of J&K that gives it special taxation powers. He said such a move will open a Pandora's Box, which will have implications on the special constitutional Position of J&K in future.

“We are proposing that the Article 370 shall not be compromised in any way through the Presidential Order. The GST Council should not be a way to subvert the process and enough safeguards are built to empower the constituents of J&K in the Council.  Besides, the exclusive powers of the State to tax and the Consolidated Fund of J&K shall not be impaired," he said.

Expressing concern over declining trade in J&K due to uncertainty over GST, Drabu said only 1,000 truckloads of goods crossed the Lakhanpur toll post on July 4, down by half when compared with the figures of the corresponding period of last year. "The exports have also halved with only 150 truckloads of goods moving from J&K to other states. This is adversely impacting our trade and economy," he said.

Responding to the opposition’s charge that the GST was being made applicable to the State under pressure from the Centre, he said, “We are not working under compulsion but for the restoration of certain processes and constitutional morality which lays foundation of a true democracy. It is the biggest tragedy of our time that we have lost our tradition of dialogue which is why we brought the resolution for GST to the House to revive that culture of consultation. We wanted a consensus on the issue”.

Drabu said the Article 370 should be protected and used for development of the state and for the empowerment of people. "Instead, it is being used as a tool to whip up political passions and draw political mileage. It is being used for creating fake controversies,” he alleged.

Seeking to allay the fears of business community, he said industry exemptions and tax remissions will continue both from the Centre and the state government under the new tax regime.

Reacting to the demand of the opposition to bring a separate GST law for J&K, Drabu said alternative law will require amending Constitution of J&K and of India. "Amending Section 5 of J&K Constitution will open Pandora's Box. Instead, what we are proposing is that the GST Council must come within the ambit of Article 370," he said. Later, the Finance Minister made similar assertions in the Upper House.