Rahul Gandhi said Cong's social media team would be expanded and party-men would be trained so as to give befitting reply to RSS propaganda. 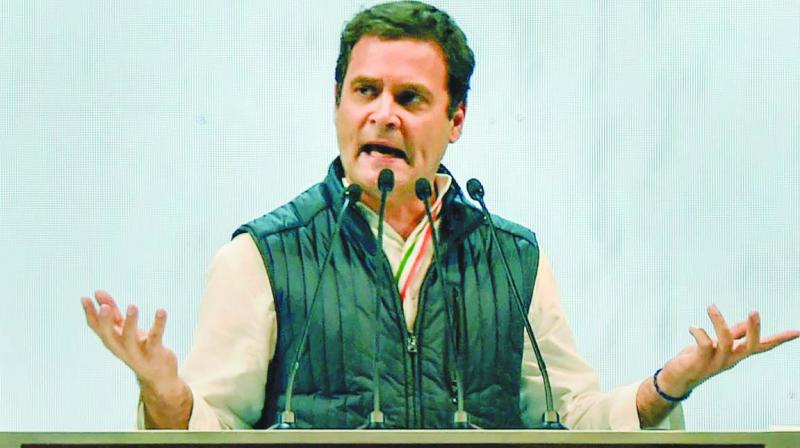 Congress president also hit out at the 'tall promises' of Prime Minister Narendra Modi claiming the much talked about bullet train might not materialise at all. (Photo: File | PTI)

The Congress president alleged that RSS leaders talk about Mahatma Gandhi but consider Godse as their idol.

Rahul Gandhi said the Congress' social media team would be expanded and party-men would be trained so as to give a befitting reply to RSS propaganda.

The Congress chief also hit out at the "tall promises" of Prime Minister Narendra Modi claiming the much talked about bullet train might not materialise at all.

"It should not be called a bullet train. It should be referred to as a magic train...It will never take shape...If at all it is ever made, it is going to be in Congress regime," Rahul Gandhi, who arrived on two-day visit on Wednesday morning, said.

Read: Bullet train like 'magic train' which may not materialise: Rahul Gandhi

Attacking the BJP government's foreign policy, Rahul Gandhi said despite the contentious and sensitive issue of Doklam on the border, PM Modi had preferred sitting on a swing with Chinese president, when he visited India.

The Congress chief, who launched a 'Shakti' portal for quick sharing of party activities among workers, alleged big businessmen were benefitting because of the ruling BJP's policies while the middle class and poorer sections were struggling.

"As much as Rs 2 lakh crores of 15 big businessmen was waived off..the first task that Narendra Modiji did was that he broke the backbone of the small and middle class businessmen," Rahul Gandhi alleged while interacting with party workers in Amethi.

He (Modi) snatched money from your pockets through GST and demonetisation and gave it away to Vijay Mallya and Nirav Modi, the Congress president said continuing his tirade. Employment generation had also been hit adversely, he added.

Stressing on the need to strengthen the party organisation upto the village level, he said a lot of work was being done in this regard.

There is a need to get connected with people and strongly put party policies before them, he said speaking to party activists from all assembly segments at Fursatganj.

Later Rahul Gandhi visited Pure Dhingai village to condole the death of a farmer who reportedly died recently while waiting for the sale of his crop at a government centre.

During the visit, Rahul Gandhi will make a night halt at the party office in Gauriganj.

Last time he stayed in the dak bungalow of Tatarpur in Jagdishpur area unlike his previous visits when he used to stay at the guest house of Sanjay Gandhi hospital.

Although the district unit president of the BJP Umashankar Pandey said that Rahul Gandhi was staying away from the hospital guest house after BJP objected to it, district unit spokesman of Congress Anil Singh said it was done for the benefit of party workers and for saving time in visiting all parts of the constituency.

Earlier on Wednesday, Rahul Gandhi was accorded a warm welcome at the Lucknow airport by party workers including UPCC president Raj Babbar.