Delhi court frames charges against Kejriwal, others for 2014 protests

The move came after advocate Irshad, appearing for Kejriwal and Sisodia, pleaded not guilty on their behalf and claimed trail. 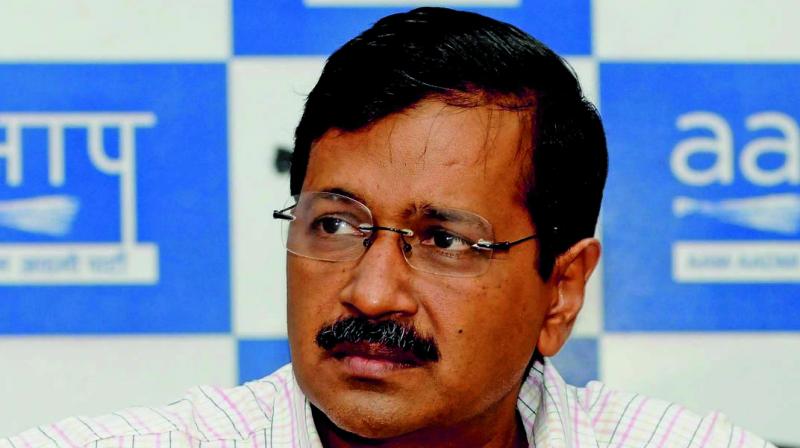 'As far as the accused Arvind Kejriwal, Manish Sisodia, Rakhi Birla and Somnath Bharti are concerned, there is sufficient evidence to come to a conclusion that there exists a prima facie case and grave suspicion about the commission of the aforesaid discussed offences,' the court said. (Photo: File)

Additional Chief Metropolitan Magistrate Samar Vishal said there was sufficient evidence to conclude that a prima facie case and "grave suspicion" was made out against them.

The court framed the charges after advocate Irshad, appearing for Kejriwal and Sisodia, pleaded not guilty on their behalf and claimed trail.

Bharti, who was present before the court, also pleaded not guilty.

The charges against MLA Rakhi Birla were, however, not framed since she was not present. The court directed her to be present before it on July 8, when the charges will be framed.

"As far as the accused Arvind Kejriwal, Manish Sisodia, Rakhi Birla and Somnath Bharti are concerned, there is sufficient evidence to come to a conclusion that there exists a prima facie case and grave suspicion about the commission of the aforesaid discussed offences," the court said.

It however discharged AAP leader Sanjay Singh and its former member Ashutosh, saying that "there is no evidence on record against them regarding their participation in the aforementioned offences".

All the six accused were chargesheeted by the Delhi Police in connection with the case. They were earlier granted bail by the court.

Kejriwal and other leaders had staged a dharna' outside Rail Bhavan demanding action against police officials who had refused to carry out a raid on an alleged drug and prostitution racket in South Delhi on January 20, 2014.

The accused were chargesheeted by the police for allegedly violating prohibitory orders under Section 144 of the CrPC and also obstructing public servants in discharge of their official duty.

In its charge sheet, the police had claimed that on January 19, 2014 the Assistant Commissioner of Police had imposed prohibitory orders in North Block, South Block, Vijay Chowk areas near Rail Bhavan and Parliament Street. The AAP leaders assembled there the very next day, defying the prohibitory orders, it said.

The police alleged that on being told about the prohibitory orders, Kejriwal had said he would go to the Home Minister's office at North Block in his car and also laid a condition that media persons and his supporters would accompany him.

The charge sheet further claimed that Kejriwal, Sisodia and other AAP leaders along with 250-300 supporters defied the orders and started moving towards the Home Minister's office.

When the police officials present there tried to stop them with barricades, these leaders instigated their supporters and they manhandled policemen, it had alleged.

According to the police, Kejriwal and his supporters then sat on a dharna' at the chowk defying the prohibitory orders.

The charge sheet had said when Kejriwal and his supporters were stopped at the barricades at Rail Bhavan chowk, they raised slogans against the police, the central government and the Home Ministry and tried to move forward by manhandling the police officials present there.

When the protesters were stopped, Kejriwal got annoyed and declared that he would stage 'dharna' for the next 10 days at Rail Bhawan chowk, it had said. He sat there and gave instigating speeches, the police had alleged.

Kejriwal had demanded immediate suspension of the "corrupt" officials who refused to act in the interest of the public whose cause Somnath Bharti had taken up, it had said.