The Congress has demanded a JPC probe into the Rafale deal, alleging corruption in the purchase of the fighter jets 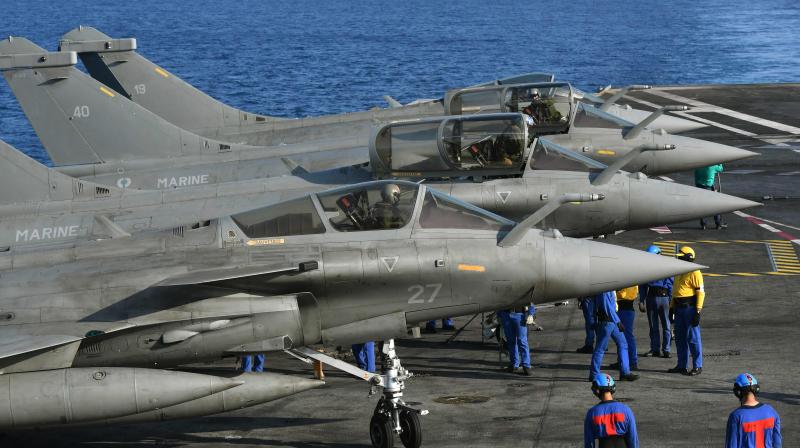 New Delhi: The Congress on Sunday hit out at the BJP-led Central government on its silence over the Rafale fighter jet deal, particularly after the French government ordered an inquiry. Stepping up his attack on allegations of corruption in the Rafale deal, Congress leader Rahul Gandhi on Sunday put out an online survey suggesting a “guilty conscience” and the desire to protect “friends” could be among the reasons why the Narendra Modi government does not want a probe by a Joint Parliamentary Committee.

In the survey that he posted, people are asked to decide why the Modi government is opposed to a JPC probe on the Rafale deal. Among the choices given were “guilty conscience”, “saving friends”, “JPC does not want a Rajya Sabha seat”, and all the above.

Congress spokesman Pawan Khera said at a press conference that the Rafale deal was an inter-governmental one between India and France, and one of the two countries had initiated a probe while the other was yet to even comment. He said: “It’s been 24 hours since France has ordered a probe on matters like corruption, influence peddling, money laundering, and favouritism. The whole nation and the whole world is now looking to New Delhi. Why the silence?”

Mr Khera added: “Now it is getting clearer that in the Rafale deal we have bought an item that costs Rs 570 crores at Rs 1,670 crores.”

The Congress has demanded a JPC probe into the Rafale deal, alleging corruption in the purchase of the fighter jets, and said that such an investigation was the only way forward to find the truth. Stepping up the heat on the Centre, Leader of the Opposition in Rajya Sabha Mallikarjun Kharge said on Sunday that a French judge being appointed to look into the allegations of corruption in the Rafale deal means that Rahul Gandhi’s stand on the matter has been vindicated. The BJP on Saturday had termed the Congress’ attacks simply “lies”.