With Naidu's win, NDA now has reserved both the top constitutional positions - President and Vice President. 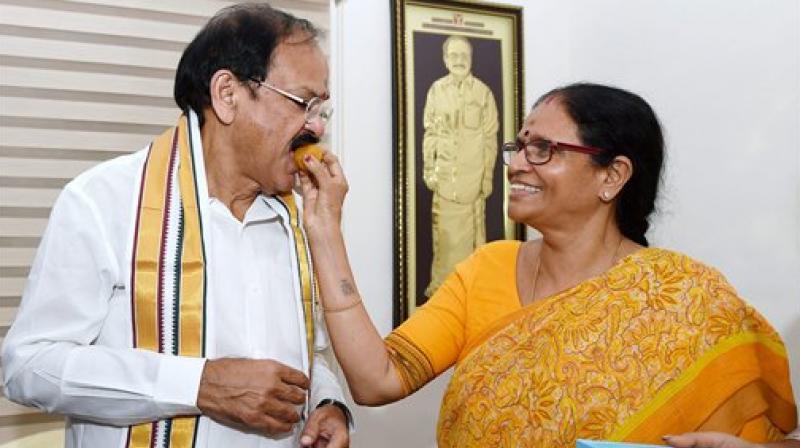 New Delhi: Venkaiah Naidu has been elected as the 13th Vice President of India.

Naidu will succeed outgoing Vice President Hamid Ansari who served on the post for 10 years. Ansari completes his term on 10 August.

After winning the Vice Presidential election, Naidu took to Twitter to express his gratitude.

"With all humility, I express gratitude to every MP who supported my candidature cutting across party lines," Vice President elect V Naidu tweeted.

"I promise to uphold the Constitution and the high standards set by my esteemed predecessors," he added.

With all humility, I express my gratitude to every MP who supported my candidature cutting across party lines.

I promise to uphold the Constitution and the high standards set by my esteemed
predecessors.

"Honor for me to become VP from a family of an ordinary farmer.This speaks for the beauty & strength of our democracy," he said.

With Naidu's win, NDA now has reserved both the top constitutional positions - President and Vice President.

Born on 1 July 1949, Venkaiah Naidu was a swayamsevak in the Rashtriya Swayamsevak Sangh (RSS) and joined Akhil Bharatiya Vidyarthi Parishad (ABVP), students' wing of BJP, during his college days.

His political career started as a student in 1973 as the president of the students union in Andhra University.

Venkaiah Naidu served as the President of the youth wing of Janta Party in Andhra Pradesh from 1977 to 1980.

He also served as the member of the Andhra Pradesh Legislative Assembly from 1978 to 1985.

Venkaiah Naidu served as the leader of BJP Legislative party from 1980 to 1985 and became General Secretary of Andhra Pradesh State BJP in 1985.

After having served in various organisational posts of the BJP at the state and national level, Venkaiah Naidu was elected as a member of the Rajya Sabha from Karnataka in 1998.

After NDA's victory in the 1999 general elections, Venkaiah Naidu became the Union Cabinet Minister for Rural development in the government headed by the Atal Bihari Vajpayee. He was known for aggressively pushing for reforms in Rural development and for the many schemes introduced during the period such as the 'Pradhan Mantri Gram Sadak Yojana.'

Following the thumping victory of the BJP in 2014 with a thumping majority, Venkaiah Naidu was sworn in as the Minister of Urban Development, Housing and Urban Poverty Alleviation and Parliamentary Affairs.

From 2016 to till his nomination as the NDA's Vice Presidential candidate, Venkaiah Naidu held a profile of Information and Broadcasting minister.