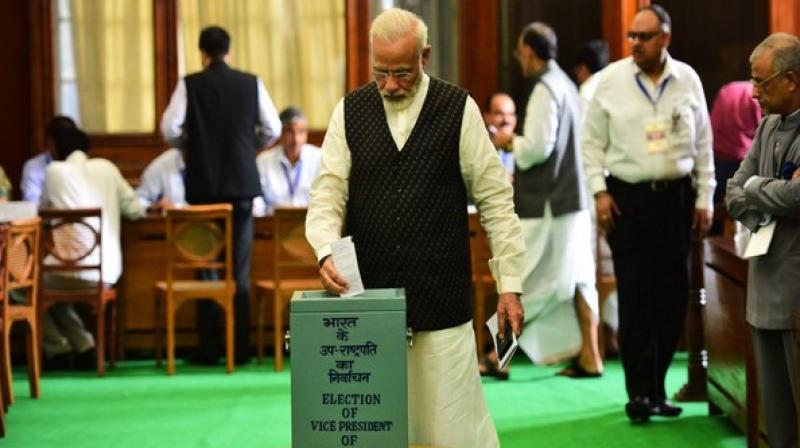 "Earlier in the morning, the first hour recorded a sizeable turnout of MPs waiting to cast their vote," Mukul Pandey, the assistant returning officer of the vice presidential polls said.

Prime Minister Narendra Modi and M Venkaiah Naidu, the NDA's Vice Presidential nominee and a Rajya Sabha member, as well as Uttar Pradesh Chief Minister Adityanath, a Lok Sabha member, were among the first to cast their ballot.

In fact, the prime minister was standing in queue even before the voting hall opened at 10 am.

Voting for the 15th Vice President of India began at 10 am on Saturday. MPs can cast their vote till 5 in the evening.

The name of the next Vice President will be known by Saturday evening after Members of Parliament cast their ballot during the day in Parliament House.

MPs will use special pens for marking their choice in the election.

The counting of votes will commence after polling and the results will be declared by 7 pm, Election Commission officials said quoting precedents. No whip can be issued by political parties as the election is through a secret ballot.

Before the voting began, Venkaiah Naidu said, "I am a non-party man. Majority of parties in India are supporting my candidature, confident that they all will vote in election."

Naidu also exuded confidence saying, "I have written a polite letter to everybody, response is very good. Confident that they all will support me."

Meanwhile, Opposition candidate GopalKrishna Gandhi called Venkaiah Naidu an experienced person and said, "No competition as such between us, only technically there is."

He further added, "It is a fight based on constitutional principles, where I maintained complete civility and same has been done from other side too."

The term of the present incumbent Hamid Ansari, who has held the post for two consecutive terms, is coming to an end on 10 August. The electoral college which elects the vice president, who is also the ex-officio chairman of the Rajya Sabha, consists of elected and nominated members of Rajya Sabha and Lok Sabha.

The total strength of the two Houses is 790, but there are two vacancies in the Lok Sabha and one in the Rajya Sabha.

In the 243-member Rajya Sabha, the BJP as of now has 56 members, while the Congress with 59 is the single largest party.

With its wins in the recent Assembly polls, the BJP is set to emerge as the single largest party in the Rajya Sabha too next year and the NDA’s tally would be close to 100. It would, however, still be short of a majority in the upper house. The one who bags 50 per cent plus one votes of the total valid votes cast will win the poll.