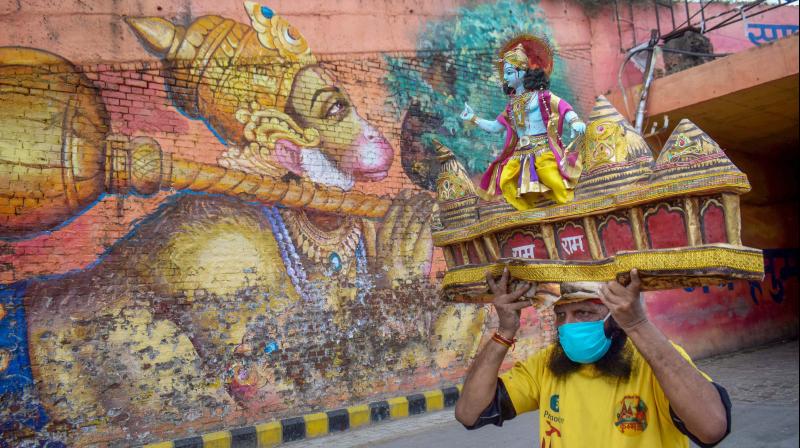 A worker carries a model of Ram Mandir on his head on the eve of the foundation stone laying ceremony of the temple in Ayodhya, in Prayagraj. PTI photo

BJP veteran L K Advani, who played a pivotal role in the Ramjanambhoomi movement and undertook the Ram Rath Yatra, which also brought the BJP into the national political scene, on the eve of foundation laying ceremony of the Ram Mandir in Ayodhya, on Tuesday said it will be a historical and emotional day not only for him but for all Indian when Prime Minister Narendra Modi will lay the foundation. Mr

Advani, 92, who will not be attending the ceremony, even though Shri Ramjanambhoomi Teerth Kshetra Trust claims he was invited but advised not to attend due to his age, said the construction of the temple after the decisive verdict of the Supreme Court last year is beginning in “an environment of tranquility” and will “go a long way in strengthening the bond between Indians. Mr Advani said a grand Ram Mandir was a dream close to his heart and was also a desire and mission of the BJP.

He expressed his gratitude to saints, leaders and people in India and the world over who made “valuable contributions and sacrifices in the Ramjanambhoomi movement.
Noting that Lord Ram occupies an esteemed place in India’s culture and civilisational heritage and is embodiment of grace, dignity and decorum, the BJP veteran said it is his belief that the temple will inspire Indians to imbibe his virtues.

The former deputy prime minister also said that he believes that Ram Mandir will represent India as a “strong, prosperous, peaceful and harmonious naion with justice for all and exclusion of none so that we can truly usher in Ram Rajya, the epitome of good governance.”