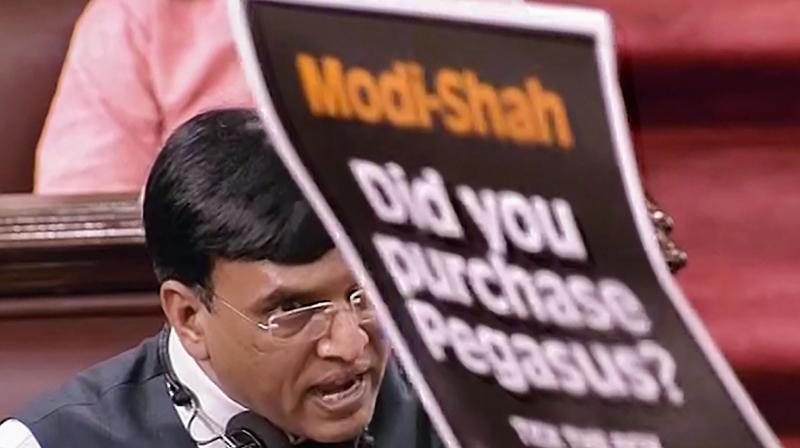 New Delhi: Fourteen Opposition parties issued a joint statement on Wednesday demanding a discussion in Parliament on the Pegasus snooping issue, to be followed by a reply from the Union home minister. Accusing the government of being “arrogant” and “obdurate” in its refusal to allow a discussion, their joint statement said the government alone was responsible for the continuing logjam in parliament. “It is unfortunate that the government has unleashed a misleading campaign to malign the combined Opposition and blame it for the continued disruption in Parliament,” the statement said.

The Opposition also unequivocally said that a discussion on the farmers’ issues and agitations arising from the three “anti-farmer agricultural laws” should follow the discussion on Pegasus. The Opposition said it “urges the government to respect parliamentary democracy and accept the discussions”. It added: “The responsibility for the deadlock lies squarely at the doorsteps of the government, which remains arrogant and obdurate and refuses to accept the Opposition’s demand for an informed debate in both Houses.”

Meanwhile, six Trinamul Congress members who ignored the requests of Rajya Sabha Chairman M. Venkaiah Naidu not to display placards in the Upper House and go back to their seats, and who were also sloganeering in the Well of the House, were suspended for the day on Wednesday for disobeying the Chair. Later, these MPs, protesting outside the Upper House lobby, allegedly tried to forcibly enter the Rajya Sabha chamber but were prevented by the security staff. In the melee, a glass door got broken, leading to a woman security officer getting injured.

Soon after Mr Jawhar Sircar took the oath as a new TMC member and official documents were laid and notices under Rule 256 were rejected, the TMC members trooped into the Well shouting slogans and holding placards against the government on the Pegasus snooping issue and demanding a discussion. Mr Naidu said there had been an agreement to discuss the farmers’ agitation, price rise and the economic situation and the House should proceed with discussing the farmers’ issues.

Taking strong exception to the placards with anti-government slogans, Mr Naidu first asked them to go back to their seats and then threatened to invoke Rule 255 against those holding placards. Some Congress MPs also entered the Well later but were not carrying placards.

As the TMC members were unrelenting despite the Chair’s requests, Mr Nadu ordered that those “disobeying the Chair and raising placards shall leave the House under Rule 255.” He, however, did not name anyone and said the Rajya Sabha secretariat will give the list.

Even after the House proceedings were adjourned, the TMC and other Opposition MPs did not leave the House. After the six TMC MPs were suspended, they protested outside the Upper House lobby during which a glass door was broken, resulting in injury to a woman security officer, sources said. Minutes after the Rajya Sabha secretariat asked the six MPs to withdraw, they tried to enter the Rajya Sabha gallery but were stopped by security officials, the sources said. Thereafter, they started protesting and singing songs outside the entrance of the gallery adjacent to Central Hall. The security officials are drafting a report on the entire incident, which will be submitted to the Rajya Sabha secretary-general.

The statement comes amid a stalemate in the Monsoon Session, with both Houses paralysed due to the Opposition’s uproar over their demand for a discussion on the Pegasus snooping issue. The Pegasus issue has also reached the Supreme Court, which will hear a bunch of petitions on Thursday, most of which are seeking a court-monitored independent investigation into the matter.