'What was the state of economy 5-6 yrs ago?' Anurag Thakur attacks Manmohan Singh, Chidambaram

He also asserted that the Modi government was taking all necessary steps to boost the economy. 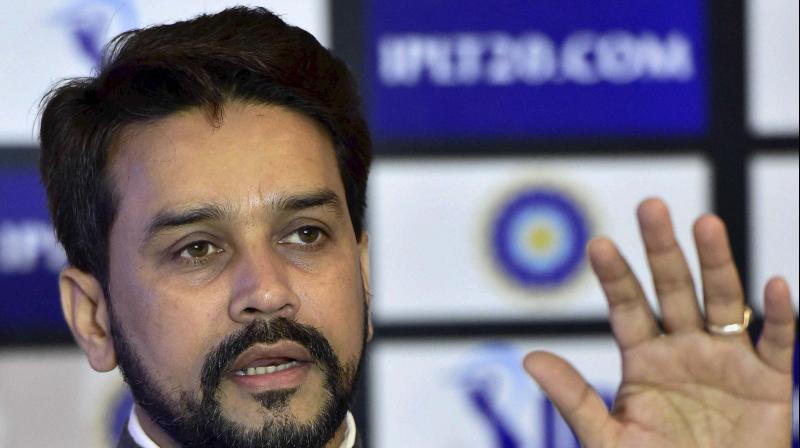 Union Minister Anurag Thakur on Wednesday said both the Congress leaders needed to look back and see the state of the Indian economy during the tenures of the UPA. (Photo: File)

Ahmedabad: Hitting back at former Prime Minister Manmohan Singh and former finance minister P Chidambaram for criticising the Centre over the plunging GDP figures, Union Minister Anurag Thakur on Wednesday said both the Congress leaders needed to look back and see the state of the Indian economy during the tenures of the UPA.

He also asserted that the Modi government was taking all necessary steps to boost the economy.

"Both the former finance minister and the former prime minister need to first look back and see what was the state of the economy during their tenures. When they were in office, the inflation rate was in double digits and the economy was (growing at a rate of) under five per cent. You do not have to look back much. You will see this if you go six or seven years back," the Union minister of state for finance told reporters.

He was in Gujarat's Ahmedabad to attend an award distribution ceremony organised by the Gujarat University Startup and Entrepreneurship Council (GUSEC).

Singh had recently said the state of the economy was "deeply worrying" and that "all-round mismanagement" by the Modi government had resulted in the slowdown.

He had added that the last quarter GDP growth rate of five per cent signalled that "we are in midst of a prolonged slowdown".

Chidambaram also took a dig at the NDA government over the slump in the GDP, which dropped to an over-six-year low of five per cent in the April-June quarter.

Minutes after Chidambaram stepped out of a courtroom in Delhi on September 3, when journalists asked him what he had to say about his CBI custody, the former finance minister said, "Five per cent. Do you know what is five per cent?"

Unfazed by the criticism by the opposition leaders, Thakur said India would become a USD 5 trillion economy well before 2024-25, a target set by Prime Minister Narendra Modi.

"I can say this because our government has kept both inflation as well as fiscal deficit under control. We are taking all necessary steps to give a boost to the economy. We are meeting officials, traders, businessmen and even consumers to implement effective steps, which will be beneficial for all of us and help the country grow further," the Bharatiya Janata Party (BJP) leader said.

He added that instructions were being given to officials across the country to make sure that taxpayers were not harassed as they "are contributing in the development of the country by paying taxes".