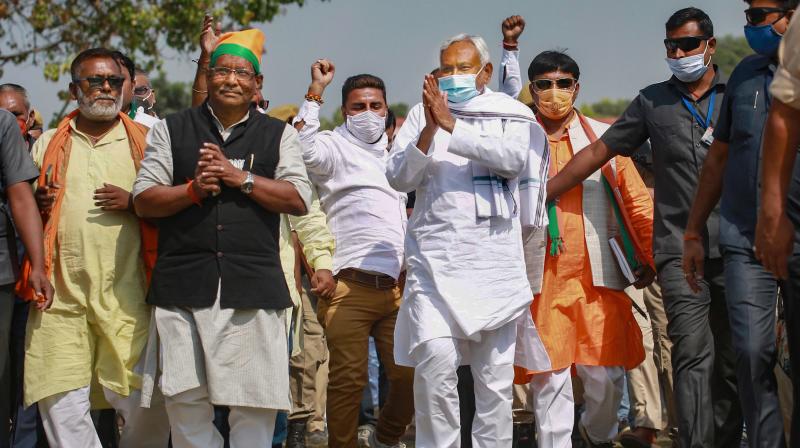 Patna: On the last day of election campaign, Bihar CM Nitish Kumar raised the political pitch by announcing that this was his last election. He gave the statement while addressing a rally in Dhamdaha in Purnea district on Thursday.

“All is well that ends well,” Chief Minister Nitish Kumar said while addressing a gathering of his party’s supporters during his public meeting. While listing his government’s achievements during the occasion he said, “Day after there is a poll in Bihar and this is going to be my last election. Now, tell me will you vote for our candidate?”

His sudden announcement created a flutter in the political circles, especially among NDA leaders who have been aggressively campaigning in Bihar for the last phase of Assembly elections.

JD(U) spokesperson Ajay Alok said, “Even if he has announced that this is going to be his last election, we know that he will continue to work for the welfare of people. His statement cannot be seen as his retirement. He has a long way to go”.

Targeting the Opposition alliance, BJP leader Prem Ranjan Patel said, “We don’t know what prompted him to announce this but I can say that people of Bihar will not let him retire. People want him because he has worked for the development of Bihar.”

A section in the NDA feels that the aggressive campaigning against him by the Opposition camp may have prompted Nitish Kumar to take a decision.

Recently while addressing a rally in Madhubani, onions were thrown at him. The incident had occurred when he was speaking about the issue of employment and development.

However, political analysts are of the view that he may have said this to attract voters in his party’s favour as he has been facing massive anti-incumbency in the polls.

The final phase of polls for 78 seats covers the 16 districts of Seemanchal region and north Bihar, which have a concentration of Muslims, Yadavs and Dalits.