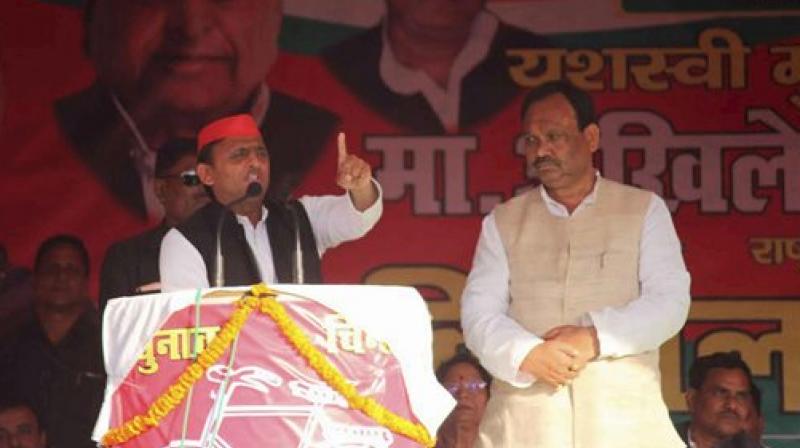 Jaunpur: Launching a blistering attack on the Bharatiya Janata Party (BJP) and Prime Minister Narendra Modi, Uttar Pradesh Chief Minister and Samajwadi Party president Akhilesh Yadav on Monday said the former has done a lot of 'Mann ki Baat' and now it is time for him to do some 'Kaam ki Baat'.

Terming Prime Minister Modi's back-to-back rallies in Varanasi as a sign of 'desperation', Akhilesh said the BJP does not have any agenda and that the people must not believe them.

Escalating his attack on the Prime Minister, the Uttar Pradesh Chief Minister said while the former was yet to fulfill his promise of 'acche din', the Samajwadi Party government had done a lot of developmental work in the state, including ambulance services, dedicated 100 number for police, medical college, constructions of roads etc.

"The people who promised 'acche din' are nowhere to be seen. The people have failed to understand Prime Minister's Mann ki Baat," he added.

"Who will believe such a leader who created her own statues across the state...beware of my bua, she could join hands with BJP at any time," he warned.

On the last day of campaigning in the marathon Uttar Pradesh elections, star campaigners will today make a final pitch for votes in multiple rallies.

Prime Minister Modi will continue his vigorous campaign out of his parliamentary constituency Varanasi, while BJP chief Amit Shah will hold four rallies in the region.

40 assembly constituencies in eastern UP, including five in Varanasi, will vote in the final round of the seven-phase UP assembly election on Wednesday. Votes will be counted on Saturday, March 11.