Animal rights activists are strongly opposed to the move to lift the ban on bullock cart races, since the bulls are usually tortured. 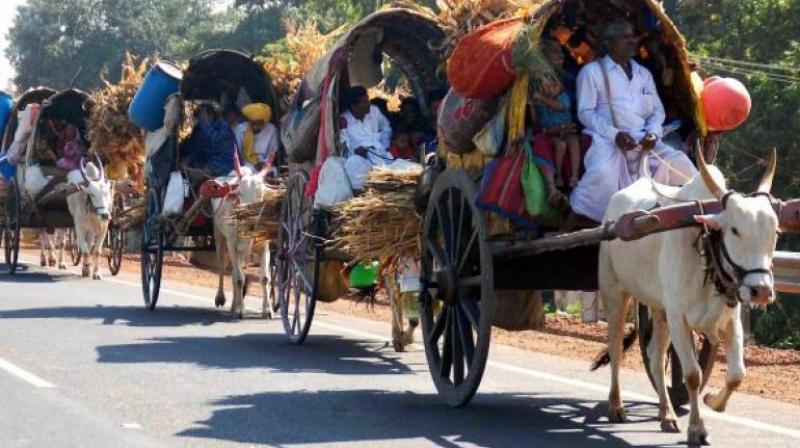 Mumbai: A BJP MLA on Monday reached Vidhan Bhawan in a bullock cart, in a novel protest to demand restarting of bullock cart races in Maharashtra.

The move by Mahesh Landge, who represents Bhosari constituency in Pune district, comes in response to a demand by farmers in his constituency that Maharashtra should emulate Tamil Nadu which lifted ban on Jallikattu.

"We are waiting for the Maharashtra government to bring in a bill to amend the Prevention of Cruelty to Animals Act, 1960, to pave the way for its centuries-old tradition of bullock cart racing," Landge said.

When pointed out that CM Devendra Fadnavis had spoken of bringing the bill during the budget session, which began today, Landge said "We want the bill to be brought in the first week itself, as village jatras (rural fairs) are beginning and people are being deprived of the races."

Security officials at Vidhan Bhawan stopped the MLA's bullock cart, followed by his supporters, outside the main building of the state legislature.

Animal rights activists are strongly opposed to the move to lift the ban on bullock cart races, saying the race was banned as the bulls were being tortured.

Tamil Nadu lifted ban on Jallikattu, brushing aside objections raised by animal rights organisations there and same policy should be adopted here as well, Landge said.

The races were banned in Maharashtra in 2011, after bulls were categorised as performing animals under the Act.

Shivajirao Adhalrao Patil, Shiv Sena MP from Shirur (Pune district) and Peasants and Workers Party legislator Jayant Patil are among the politicians who have been pursuing the issue with the state.

Adhalrao Patil said he had raised the issue in Parliament thrice and sought intervention of PM Narendra Modi to restart the bullock cart races.