Rajinikanth dismissed the theory that he was angling for MGR’s votes by trying to become another MGR. 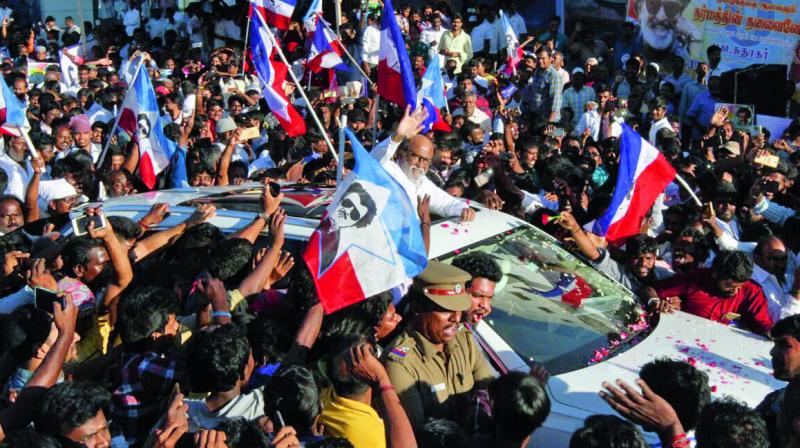 Chennai: Asserting that he was entering politics only to fill a leadership vacuum in the state, Superstar Rajinikanth on Monday declared that his intention would be to give a pro-poor people friendly government just as MGR had done. “Yes, I am going to provide a government that will do good for the people”, he declared.

In his strongest and most direct political speech, Rajinikanth replied to the politicians criticising the entry of film stars to politics, with the words, “We are forced to enter politics, because you politicians have failed to do your job.” His carping remark was greeted with wild cheers by the huge audience at the MGR Medical University owned by MGR loyalist A.C. Shanmugam, former MP and MLA of the AIADMK.

Rajinikanth unveiled a statue at the university and his road trip to the venue was marked by large enthusiastic fans and supporters greeting him along the 15 km route, bringing traffic to a standstill. The grand spectacle could be dubbed a teaser to the star’s actual political launch. The road show, the crowds en route, the welcoming banners and fans from neighbouring districts culminating in that massive audience at the college venue resembled a virtual political conference.

But the most important observation the superstar made was that he indeed was stepping in to fill the political vacuum caused by the absence of two strong leaders – Jayalalithaa and Karunanidhi. “There is a need for strong political leadership, strong leaders and I am here to provide that because others have failed to do so,” he said. Rajinikanth said that he had been doused with political waters since 1996 (when he had famously opposed Jayalalithaa) and his political instincts had been honed by his close association with Cho Ramaswamy, Moopanar and Karunanidhi

Rajinikanth dismissed the theory that he was angling for MGR’s votes by trying to become another MGR. “Let there be no doubt – there can never be another MGR. He was God’s gift to mankind. A ‘yugapurush’ who cannot be emulated by anyone. Only if he is reborn again there can be another MGR. But I promise that my aim would be to provide an honest and people oriented government that MGR did. Like the noon meal scheme for all children, current connection to even huts, cheap rice, bus routes to every villages at nominal fares.”