India   Politics  06 Apr 2019  BJP born out of sweat of its workers, not dynasty or money: Modi in Odisha
India, Politics

BJP born out of sweat of its workers, not dynasty or money: Modi in Odisha

Addressing a rally, Modi said that today BJP flag is flying proudly in regions where it was unimaginable at one point of time. 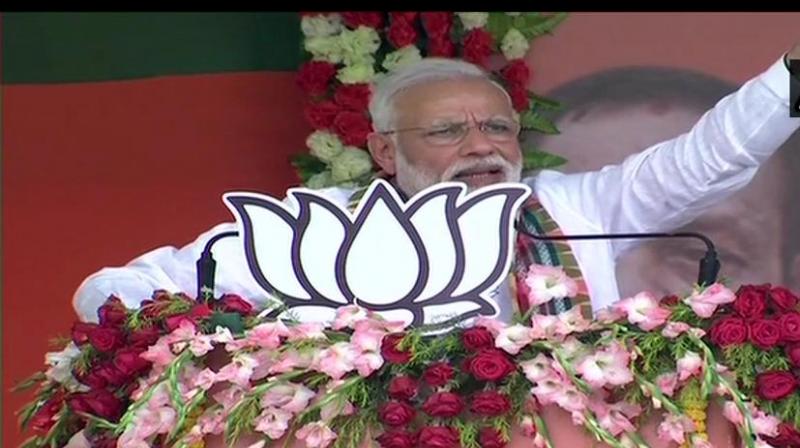 Odisha: Accusing Congress for using poverty as its political weapon, Prime Minister Modi in his second rally in Sonepur on Saturday said that the Opposition party does not want to lose this weapon.

Noting that the Congress only gave slogans for eradication of poverty for generations but never took any step to ensure it, he said poor people have turned poorer and their leaders and ministers became richer.

The Congress as well as the BJD used poverty for politics for which a major part of the country and Odisha was in immense poverty for decades. As a result, Maoists are taking advantage of the situation, Modi said.

Calling the Bharatiya Janata Party the biggest ‘democratic organisation in the world’, Prime Minister Narendra Modi said at the previous election rally on Saturday morning that BJP was born out of the sweat of its cadres and not from the genes of dynasty.

Modi, who spoke at Odisha’s Sundergarh, said: “BJP is the only self-built party in the nation. It was not born of dynasty or money.”

On Saturday -- the 39th foundation day of the party – Modi proudly announced that the flag was flying in regions where it was once unimaginable. “We are now a strong option to the Congress and other parties which were formed from within the Congress,” Modi added.

Hitting out at the Naveen Patnaik-led Biju Janata Dal (BJD) government's intentions in the state, Modi said the people of Odisha would have to decide whether they wanted an honest and principled government committed to the development of all, or a corrupt and unprincipled one.

PM Modi also stated that all promises made by 'chowkidar' of Ayushman Bharat (read, him) would have been fulfilled only if the ruling party in the state was not corrupt.

"This time, lotus will bloom in Odisha. The BJP will taste victory. I can say with certainty that the maximum number of lotuses will bloom in the state," Modi said at the rally in tribal-dominated Sundargarh.

Similarly, the BJP will again come to power at the Centre as the country needs a strong and decisive government to ensure national security as well as speedy development, the Prime Minister said.

Assembly elections in Odisha would be held along with the Lok Sabha polls in four phases on April 11, 18, 23 and 29.

BJD had an alliance with BJP in Odisha and it also supported the NDA in the centre since 1998 till 2009 when Naveen Patnaik decided to break the alliance and go alone in the 2009 general and assembly elections.

However, the party won a majority of seats in the state legislative assembly in the 2000 and 2004 elections in alliance with BJP.