He asserted that the Cong' manifesto clearly states that farmers cannot be jailed for non-repayment of loans. 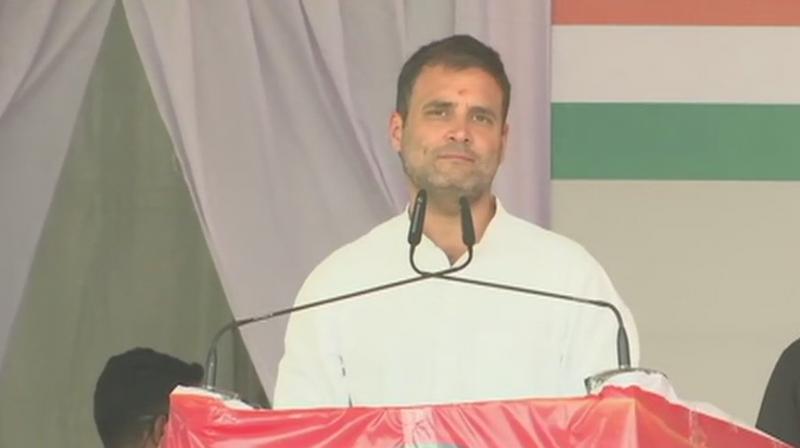 Gandhi said a separate budget would be presented for farmers to give them a clear idea of how much money the government has allocated for them. (Image: ANI twitter)

Uttarakhand: Congress president Rahul Gandhi Saturday said the BJP should not question the feasibility of the minimum income scheme promised by his party when, he alleged, the Narendra Modi government had no qualms in "giving money" to businessmen like Nirav Modi and Mehul Choksi.

Addressing rallies at Almora, Srinagar and Haridwar in Uttarakhand to drum up support for party candidates in the five Lok Sabha seats of the state going to polls on April 11, Gandhi said, "He (Modi) didn't think for a moment when he took your money to give it to the likes of Nirav Modi, Mehul Choksi and Anil Ambani." "And now, when it has come to paying some money to the poorest as an income support, he is asking where will the money come from," the Congress president said. "I have consulted economic experts and they said it is feasible without derailing the economy," he said.

Gandhi claimed that minimum income scheme for the poor promised in the Congress' poll manifesto will be a surgical strike on poverty without burdening the economy. "Before making the scheme a part of our manifesto I took the advice of our economic experts like P Chidambaram and Manmohan Singh on how to give money to the poor without derailing the economy and they came up with a figure of Rs 72,000 per year. The amount will be credited into the account of the 20 per cent poorest families every year," Gandhi said addressing a rally in Srinagar. Thus a total of Rs 3.6 lakh will be deposited into the account of each beneficiary over a period of five years, he claimed.

Accusing Modi of letting down farmers and the youth by going back on all the promises made to them in 2014, the Congress president asked what happened to the slogan of Rs 15 lakh in everyone's account, the loan waiver promised to farmers and the two crore jobs for the youth annually. "Why doesn't Modi speak about these slogans at his election rallies?" he asked.

Dubbing the Goods and Services Tax (GST) as 'Gabbar Singh Tax', Gandhi claimed that it has destroyed the small and medium businessmen who generate employment, and promised that the unified tax regime would will be simplified if the Congress is voted to power.

He also asserted that the Congress' manifesto clearly states that farmers cannot be jailed for non-repayment of loans. "If Mehul Choksi and Nirav Modi are not being jailed why should farmers go to jail? The Congress is with the farmers, let Modi go with the capitalists," he said.

Besides waiving farm loans, Gandhi said a separate budget would be presented for farmers to give them a clear idea of how much money the government has allocated for them. He also alleged that Modi did not have any agenda for the country's development and was only making false promises to come back to power.