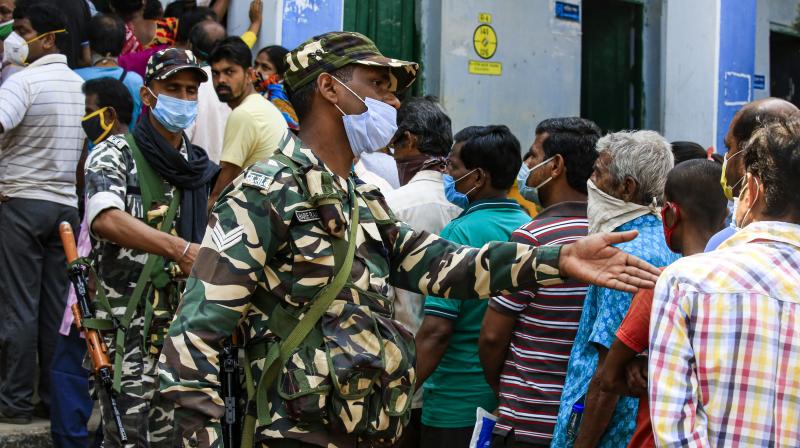 Hooghly: A clash has erupted between Trinamool Congress (TMC) and Bharatiya Janata Party (BJP) workers in Arambagh as the third phase of West Bengal Assembly polls is underway on Tuesday.

TMC candidate from Arambagh constituency Sujata Mondal Khan has accused BJP workers of threatening and misbehaving with women voters in Arandi area.
Speaking to ANI, Sujata said, "In Arandi-I area here, we have minority and scheduled caste voters who love Mamata Banerjee. Goons of BJP threatened, tortured and misbehaved with women voters last night. They (BJP) did this because they know that these people will vote for me."

"At booth no 45 in Batanal, despite pressing the symbol of TMC, the vote is going for the BJP. I believe that I will get the blessings of people. In Arandi, our workers have been beaten up. They (BJP) are thinking that by creating violence they will get the Arambagh seat. They are mistaking. I am the kind of person who does not fear death," added Sujata.

The TMC leader also alleged that CRPF is acting of the behest of the BJP.

"I feel sad when I see the CRPF is not working neutrally. They have become the agent of the BJP and asking people to vote for BJP," stated Sujata.

A total of 31 Assembly constituencies in districts including eight in Hooghly, seven in Howrah and 16 in South 24 Parganas are going to polls in phase-III. There are 205 candidates in the fray in this round of polling. However, when it comes to women representation, there are only 13 women candidates contesting in this phase, merely six per cent.

In the Arambagh constituency, TMC has fielded Sujata Mondal Khan against CPI(M)'s Sakti Mohan Malik and BJP's Madhusudhan Bag. The interesting fact is Sujata Mondal Khan is the wife of BJP MP Saumitra Khan. Sujata joined TMC ahead of the state Assembly polls, following which her husband Saumitra served a divorce notice to her.