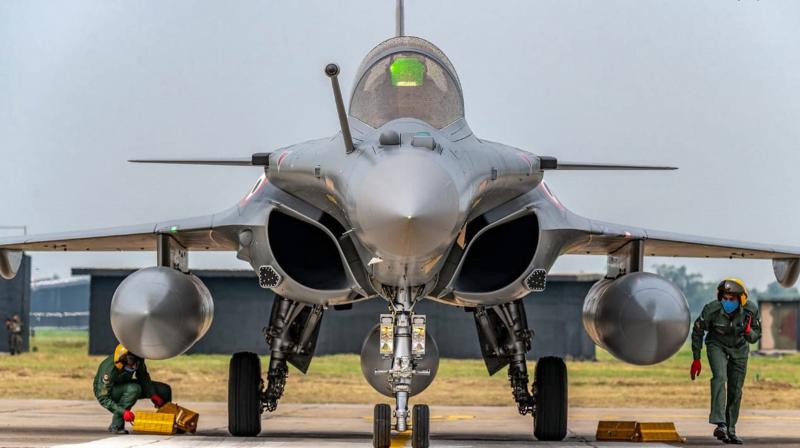 The report said as AFA inspectors combed through Dassault accounts in 2017, they raised an eyebrow when they came across an item expenditure costing 508,925 euros entered under the heading gifts to clients. (Photo: PTI)

New Delhi: In a fresh controversy over the Rs 59,000-crore Rafale fighter jet deal, French investigative news portal Mediapart has claimed that its manufacturer Dassault Aviation agreed to pay one million euros to a middleman who is now under investigation in India in connection with another defence deal.

Mediapart said the French anti-corruption agency Agence Française Anticorruption (AFA) discovered this separate arrangement during a routine audit of Dassault. The AFA nonetheless decided not to alert the prosecution authorities over the payment.

The report said as AFA inspectors combed through Dassault accounts in 2017, they raised an eyebrow when they came across an item expenditure costing 508,925 euros entered under the heading “gifts to clients”. It said this amount of money seemed disproportionate in relation to all other entries under the same heading. “The sum is indeed huge for a gift. Though French law does not set out precise limits, legal precedents suggest that giving a watch or an expensive meal costing several hundred euros can be enough to constitute corruption,” the Mediapart report said.

It said Dassault supplied AFA with proforma invoice, which was supplied by an Indian company called Defsys Solutions. This invoice, that related to 50 per cent of the total order (1,017,850 euros), was for the manufacture of 50 replicas of the Rafale with the price of each model 20,000 euros. AFA asked Dassault why it ordered an Indian company to make a replica of its aircraft at 20,000 euros per piece. AFA enquired whether these replicas, supposed to be the size of a car, were really ever made? Dassault was unable to provide single document or photograph showing that these models existed and were delivered, said the news report.

The news report said inspectors suspected this was a bogus purchase designed to hide a hidden financial transaction.

On reports that some of these models have been put out in India including at the Indian Air Force Chief's residence, Yann Philippin, the journalist who wrote the story, said that besides the huge price of these models, what was strange was that Dassault refused to confirm if they were the same models manufactured by DefSys. "Dassault refused to confirm to me that these are the same models. Are they the same model that were ordered to this Indian company? We don't know. What is strange is that if there was no problem and that was just an Indian company manufacturing models, Dassault should have spoken to us and told us everything was clear. We ordered these models they are to be given to institutions in India to celebrate the Rafale deal. They could have explained to us. They said no comment. There seems to be some kind of embarrassment regarding these plane models at Dassault headquarters," he told a news channel.

The CBI and Enforcement Directorate is investigating Defsys Solutions run by Sushen Gupta in the AgustaWestland case involving kickbacks paid in India in a deal for VVIP helicopters. Defsys is one of the Dassault sub-contractors in India.

The BJP, meanwhile, on Monday dismissed as “completely baseless” the fresh allegations of corruption in the Rafale deal, stressing that the Supreme Court had rejected the demand for a probe into the purchase of the fighter aircraft and the CAG also found nothing wrong.

Responding to a question about the Congress’ attack on the Narendra Modi government over the bribe allegations, senior BJP leader and Union minister Ravi Shankar Prasad said at a press conference that the Opposition party had made it a big issue in the 2019 Lok Sabha polls but had lost badly.

He said the allegations of corruption were “completely baseless” and said that a report in the French media about the alleged financial irregularity in the deal may be due to “corporate rivalry” in that country.

Noting that the Congress had raised the issue earlier too, he said the Supreme Court had rejected the demand for a probe and the Comptroller and Auditor General also found nothing wrong in the fighter jet deal.

The Congress on Monday sought a thorough probe in the Rafale defence deal and demanded answers from Prime Minister Narendra Modi after the French media report claimed that 1.1 million euros were paid to a “middleman” by the aircraft manufacturer.