Congress leader D K Shivakumar, JD(S)' H D Revanna are among those who took oath as ministers in the Cabinet. 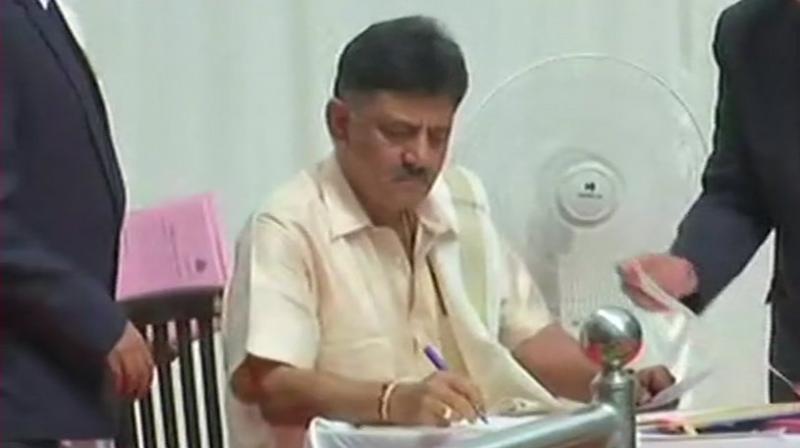 Bengaluru: A fortnight after becoming the Chief Minister of Karnataka, H D Kumaraswamy on Wednesday carried out the first expansion of the cabinet with the induction of 25 ministers.

The Congress and the JD(S) decided on the ministers after weeks of hectic discussions and bargaining.

Of the 25 ministers, fourteen ministers are from the Congress, nine from its ruling coalition partner JD(S) and one each from the Bahujan Samaj Party (BSP) and the Karnataka Pragnyavantha Janatha Party (KPJP).

Senior Congress leader D K Shivakumar, who had been the party’s biggest crisis manager at the time when the party was trying to prevent its lawmakers from being poached by the BJP, took oath as minister.

H D Revanna, brother of chief minister Kumaraswamy, was the first one to take oath as minister.

JD(S)’ S R Srinivas and D C Thamanna were also sworn-in as ministers. Both the leaders are first time ministers.

Congress leaders N H Shivashankar Reddy, who is the former deputy speaker, and Ramesh Jharkiholi were also inducted in the Cabinet.

Priyank Kharge, son of Congress leader Mallikarjun Kharge, and former food and civil supplies minister U T Abdul Khader also took the oath as ministers. Khader had also served as the health minister of the state.

B Z Zameer Ahmed Khan, Congress MLA from Chamarajpet, was also inducted as the minister in the Cabinet.

Lone BSP MLA N Mahesh was also sworn-in. BSP had a pre-poll alliance with the JD(S).

Independent candidate from Ranibennur, R Shankar, who supported the Congress after the results, was also inducted in the Cabinet.

In a simple ceremony, new ministers were sworn-in to the Cabinet with Governor Vajubhai Vala administering the oath of office at Raj Bhavan.

As per the power-sharing arrangement, the Congress would have a total of 22 ministers while the JD-S will have 12, including the chief minister.

With today's expansion, the strength of the ministry has gone up to 27, leaving seven more vacancies to be filled.