In a series of tweets, Kumaraswamy criticised the budget and said it is a 'big blow' to the state's economy. 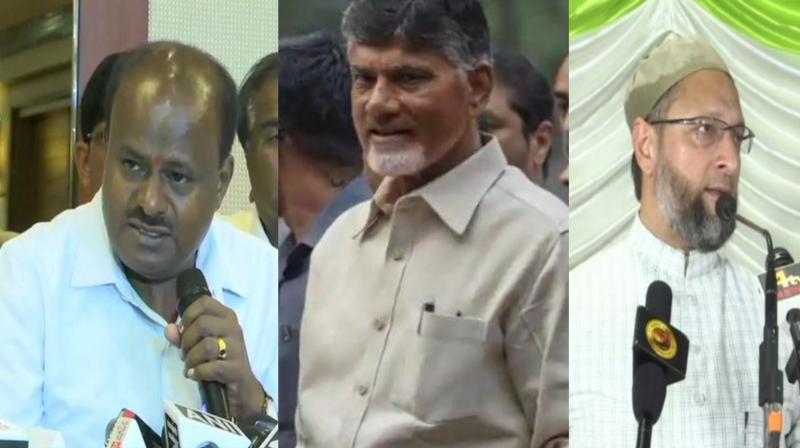 The Opposition leaders criticised the Union government for presenting a business-as-usual Budget by the Modi-led government on Friday. (Photo: File)

Mumbai: The Opposition leaders criticised the Union government for presenting a business-as-usual Budget by the Modi-led government on Friday.

Telugu Desam Party Chief and former Andhra Pradesh chief minister Chandrababu Naidu on Friday dubbed the Union Budget as "disappointing" and said that it was not in accordance with the wishes of the people of Andhra Pradesh.

"The budget is not in accordance with the wishes of the people of Andhra Pradesh. The centre made budgetary allocations to the northeastern States but ignored Andhra Pradesh, which is reeling under severe financial crisis. The budget has badly disappointed the people of the state," said Naidu.

The special category status and other issues in the Andhra Pradesh Reorganization Act were also ignored, he said.

The TDP leader also said that the central government had allocated only Rs 13 crore for tribal university and central university. Even though work on the capital city, Amaravati and Polavaram project came to a grinding halt four months ago, the Centre had not made any allocations for the same, he said. Naidu, however, lauded the central government for proposing the Zero Budget Natural Farming (ZBNF) method.

In a series of tweets, Kumaraswamy criticised the budget and said it is a "big blow" to the state's economy. He said "more morale boosting programmes were desirable for the farming sector" and added that he was disappointed that no projects or aid were announced for suburban railways.

This budget has given a big blow to the States economy by reducing GST state share. For Karnataka it will be cut down by around Rs.1600 crore.Cess hike on fuel will also reduce scope for states to levy cess.Moreover fuel price hike will hit everyone directly & indirectly as well

Budget speech is the most important medium for communicating with the people. Certain intents have been said and nothing beyond it.#Budget2019

Karnataka Chief Minister H D Kumaraswamy said that he had "great expectations" from Finance Minister Nirmala Sitharaman, who represents Karnataka, but he was "disappointed" after she presented her first budget in the parliament earlier in the day.

I expected more from Smt. @nsitharaman who represents Karnataka, for railways, especially suburban railways, but very disappointed as no projects/ aid were announced.
In the Indian Context budget is not a mere statement of intent.

All India Majlis-e-Ittehadul Muslimeen (AIMIM) lawmaker Asaduddin Owaisi on Friday lashed out at Union Minister of Minority Affairs Mukhtar Abbas Naqvi for not fulfiling the promise of providing scholarship to one crore Muslim students in the Union Budget.

Addressing a public gathering here, Owaisi said: "Naqvi had promised to give scholarship to one crore Muslims students every year. Why was the scholarship not provided in the Union budget?"

Owaisi also accused BJP of creating a rift between Hindus and Muslims in the country, while asserting that his party will not let that happen.