In his first public comments after Singhar's allegations, the Digvijaya said his fight is against the ideology that killed Mahatma Gandhi. 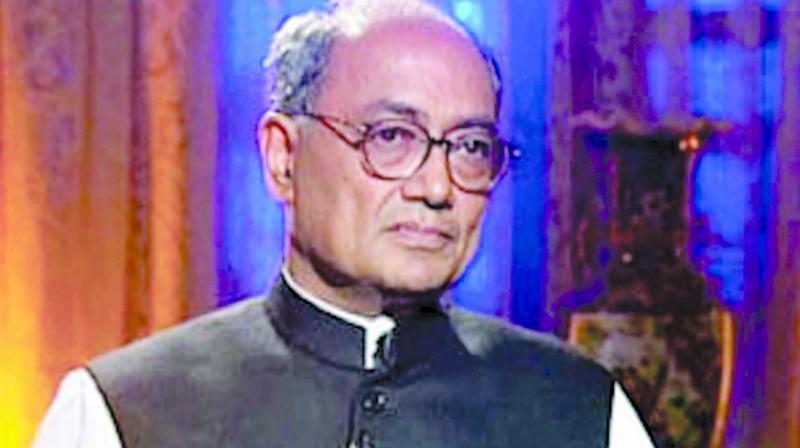 The 72-year-old Congress veteran denied suggestions that he was acting like a 'super CM' and said Nath was strong enough to handle his responsibilities. (Photo: Representational)

Bhopal: Giving a new twist to the ongoing infighting in the Madhya Pradesh Congress, party veteran Digvijaya Singh on Friday sought to link it to his allegations associating BJP and Bajrang Dal leaders with Pakistans spy agency ISI.

Digvijaya Singh said the allegations levelled against him by party colleague and Forest Minister Umang Singhar would be looked into by AICC president Sonia Gandhi and Chief Minister Kamal Nath, who is also the MPCC head.

In his first public comments after Singhar's allegations, the former chief minister said his fight is against the ideology that killed Mahatma Gandhi.

The 72-year-old Congress veteran denied suggestions that he was acting like a "super CM" and said Nath was strong enough to handle his responsibilities.

The Rajya Sabha MP further added, They were held by the STF in 2017 but the then BJP government did not invoke the National Security Act (NSA) against them. "The BJP government also did not oppose their bail (in court). The recent development is linked to these allegations. This (Singhars allegations) has given opportunity to the BJP (to target the Congress)," he said.

Digvijaya Singh said party leadership will look into the statements made against him by Singhar. What happened during the past 4-5 days would be looked into by Kamal Nath ji and Sonia ji. I appeal to all to abide by party discipline and not to offer any opportunity to the BJP (to criticise the Congress and its government)," he said.

Earlier this week, Singhar, who is the nephew of former leader of opposition and Congress stalwart the late Jamuna Devi, had accused the former two-time chief minister of "blackmailing" the party-led government in the state. In a letter to Sonia Gandhi, Singhar had claimed Digvijaya Singh is trying to "destabilise" the nine-month-old Nath government.

Digvijaya Singh had recently written a letter to state ministers, urging them to give him appointment so that he can know what action has been taken on his recommendations for transfers and other development works.

Singhar took strong exception to Singh's letter, saying the former chief minister is running the Nath-led government from "behind the curtain".

Justifying his letter to ministers, Digvijaya Singh said, "The Congress government has been formed due to hard work of party workers. They come to me for their work and letters of the same were forwarded to ministers. "What was wrong in the letter if I wanted to know about the action on these letters in accordance with law. This is my responsibility as an MP. Asked if he will meet Singhar to sort out differences, Digvijaya quipped, I am not a diabetic. I dont drink bitter tea. Asked about allegation about his being a "super CM, Digvijaya Singh said, Kamal Nath ji is a strong enough and he doesnt need anybody else.

Earlier on Wednesday, Singhar had softened his stand after meeting Nath and talking to the partys state in-charge Deepak Babaria. "I have put forward my views before the party high command and Kamal Nath ji and I have nothing more to say," Singhar told reporters on Friday when asked about reaction on Digvijaya's statements.