Farmers vow to carry on stir till 2024 polls 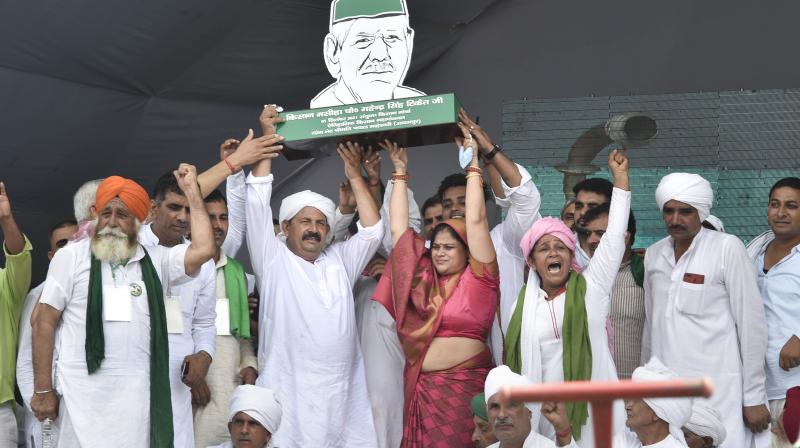 New Delhi/Lucknow: Thousands of farmers protesting against the Centre’s three controversial agricultural laws held a “mahapanchayat” at Muzaffarnagar in Uttar Pradesh on Sunday, where they reiterated their resolve to continue with their agitation and campaign against the BJP in the forthcoming state elections. The farmers’ leaders also gave a unanimous call for a complete Bharat Bandh on September 27 against the three farm laws.

The leaders made it amply clear that they will campaign against the BJP in both the Uttar Pradesh and Uttarakhand Assembly elections in 2022 if the Centre did not accept their demands. They also threatened to carry on their agitation till the 2024 Lok Sabha elections. The leaders said that efforts would now be made to strengthen the movement and ensure that farmers have their own government -- one that caters to their interests.

The leaders said the mahapanchayat had proved that their agitation has the support of “all castes, religions, states, classes, small traders and all sections of society”. Organised by the Samyukta Kisan Morcha (SKM), a combine of about 40 farmer unions, the mahapanchayat gained political significance as it was attended by a large number of Muslims and Jats as comrades-in-arms just eight years after riots had disturbed communal harmony in the region. The ruling BJP had become a major electoral beneficiary in the aftermath of the riots in the region.

Attacking the Central government for “selling the country to corporates”, Bharatiya Kisan Union leader Rakesh Tikait, who has become the face of the agitation across the country, said the farmers were fighting to “save the nation”. He said meetings will be held across India to stop the nation “from getting sold”. He said: “Farmers should be saved, the country should be saved; business, employees and youth should be saved -- this is the aim of the rally.”

AICC Congress general secretary Priyanka Gandhi Vadra said: “Farmers are the voice of this country. The farmers are the pride of the country. Arrogance of any power cannot withstand the roar of the farmers… The whole country is with the farmers in the fight to save agriculture and in demanding their dues in lieu of their hard work.”
Indicating a growing unease within some sections of the BJP over the continued farmers’ agitation ahead of the UP Assembly polls, party MP Varun Gandhi described the farmers as “our own flesh and blood”, and suggested that the government should re-engage with them in reaching common ground. “Lakhs of farmers have gathered in protest today in Muzaffarnagar. They are our own flesh and blood. We need to start re-engaging with them in a respectful manner: understand their pain, their point of view and work with them in reaching common ground,” Mr Gandhi tweeted, posting a short video of the large crowd.

Addressing the mahapanchayat, Mr Tikait said: “The Centre ended talks on January 22. They did not even express grief over the deaths of more than 600 farmer protesters over the past nine months. Who are these people selling the country? We need to identify them. You (Centre) have cheated the people of the country. They are selling our farmlands, highways, power, LIC, banks… and the corporate houses are the buyers. Even the FCI godowns and ports are being sold. Under this government, the entire country is up for sale.”

Attacking both the Centre and the UP government, Mr Tikait said that the protests will only escalate in the days ahead. “The mills owe over Rs 12,000 crores to sugarcane farmers.

The Yogi Adityanath government has not increased the SAP even by a rupee. The movement started over the demand to repeal three black laws and MSP. Fasalon ke daam nahi toh vote nahi. People of UP will not tolerate Shah, Modi and Yogi. Is the Yogi government so weak that it cannot raise the price of crops by even one rupee? … If we have governments like this, there will be riots.”

BKU media in-charge Dharmendra Malik said farmers belonging to 300 organisations spread across different states like UP, Haryana, Punjab, Maharashtra, Karnataka, among others, had gathered for the event. He said over 5,000 langars (food stalls), including some mobile stalls, had been set up for the participants.

The farmers, including women, carrying flags of different organisations and wearing caps of different colours, arrived at the venue in buses, cars and tractors. A woman farmer leader from Karnataka also addressed the gathering in Kannada.

The Muzaffarnagar administration had denied Rashtriya Lok Dal chief Jayant Chaudhry’s request to sprinkle flowers from a helicopter on the venue and participants of the mahapanchayat. City magistrate Abhishek Singh rejected the request, saying it can’t be allowed for security reasons.

The mahapanchayat was also a mark of protest against the Haryana police action against protesters in Karnal on August 28. About 10 people were injured after the state police lathicharged a group of farmers who had stopped traffic on a highway while heading for Karnal to protest against a BJP meeting attended by chief minister Manohar Lal Khattar, state BJP chief Om Prakash Dhankar and other leaders. One person had died, which the police later said was a case of heart attack.

The farmers’ protest against the three contentious laws has completed over nine months since they first arrived at Delhi’s borders. They have been demanding the repeal of the laws, which they are afraid will do away with the MSP system, leaving them at the mercy of big corporations.