Nagara also said that their efforts should be made to safeguard the wildlife and forest instead of destroying it. 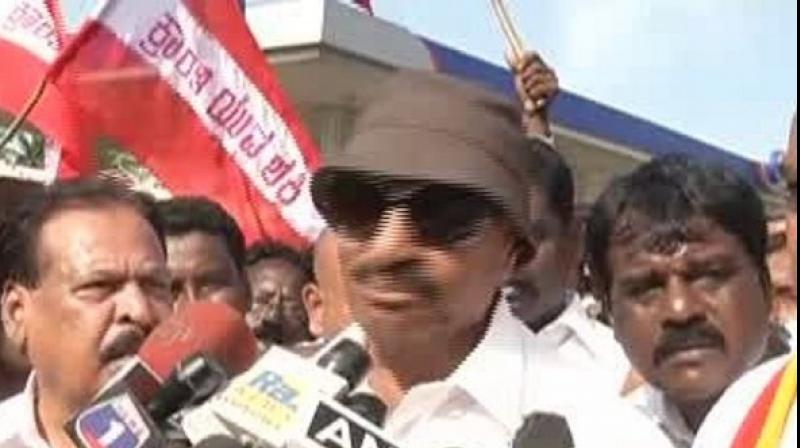 He also staged a protest outside the railway station in Mysore on Saturday in favour of the traffic ban.

"Rahul Gandhi must be boycotted in Karnataka as he's supporting the protest in Kerala against Bandipur night vehicles ban," Nagara said on Saturday.

He said that Gandhi supporting stir in Kerala against the traffic ban despite the Supreme Court order in the matter is unacceptable.

"Bandipur and the wildlife are assets of Karnataka. It's everyone's responsibility to protect it. But the timber mafia, which is orchestrating these protests in Kerala, is creating the ruckus to ensure that vehicles are allowed in Bandipur," he said.

"It is unfortunate that Kerala government is also supporting them," he added.

Nagara also said that their efforts should be made to safeguard the wildlife and forest instead of destroying it.

"No committee should be formed to build any roads or flyover in Bandipur either," he said.

Rahul Gandhi had joined the protesters, who are on an indefinite hunger strike opposing the daily nine-hour traffic ban on NH 766 that links Kerala and Karnataka, in Sultan Bathery here on Friday.

The protests had begun on September 25.

Karnataka Chief Minister BS Yediyurappa had, on October 2, slammed Rahul Gandhi for supporting the protest despite the Supreme Court order and said that the ban will continue.