BJP in Tripura gets major jolt; MLA defects to Trinamul

Dissatisfied with himself for his association with the BJP, Mr Das performed his 'atonement' by shaving his head at a temple 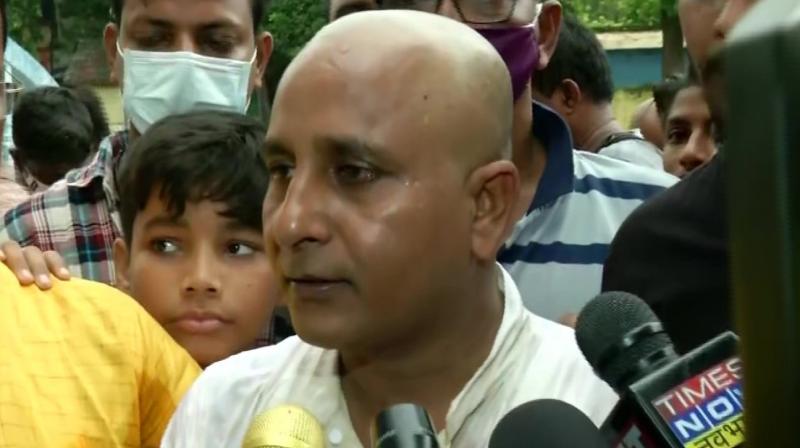 Mr Das is all set to defect to the Trinamul Congress on Wednesday on the auspicious occasion of 'Mahalaya', that marks the onset of Debipaksha, a week ahead of the Bengalis’ biggest festival, the Durga Puja. (Twitter)

Kolkata: The BJP has received its first setback in Tripura after West Bengal as its Suma (Dhalai) MLA, Ashish Das, quit the party with religious rituals in Kolkata on Tuesday. Dissatisfied with himself for his association with the BJP, Mr Das performed his “atonement” by shaving his head at a temple and taking a holy dip in the Adi Ganga at a temple at Kalighat, close to Trinamul Congress supremo Mamata Banerjee’s residence. “I removed my sins,” he said.

Mr Das is all set to defect to the Trinamul Congress on Wednesday on the auspicious occasion of “Mahalaya”, that marks the onset of Debipaksha, a week ahead of the Bengalis’ biggest festival, the Durga Puja. Mr Das has already held talks with the TMC quietly while camping in the city for the past few days.

Hailing Ms Banerjee’s leadership, he said: “She has been the choice of many people for the post of Prime Minister. We have not seen any Bengali become Prime Minister till now. I bagged around 25 per cent votes in 2015 when I won as a BJP MLA. Its effect was reflected in my re-election as a BJP MLA in 2018. But an anarchy has been underway in Tripura.”

Mr Das also told the media: “You may ask why I am feeling it now? I would say I reached out to the people with services by rising above the party and the administration there. Many central leaders have been visiting Tripura and other northeastern states, often in the name of solving the people’s problems. Unfortunately, no problem has yet been solved. It is not the problem of Tripura CM Biplab Deb. It is a collective issue.”

He is, however, not alone on the radar of the TMC, which has pledged to expand its network in Tripura and other states of the Northeast. There are 10 more BJP MLAs, mostly Bengalis, who are in touch with the TMC for defection, according to sources.

Mr Roy Burman, who is also known for his rivalry with the Tripura CM, is believed to be the key figure behind the revolt in the BJP in the neighbouring state. He was earlier roped in to the TMC by Mukul Roy around 2015 when he was in Ms Banerjee’s party. Mr Roy Burman and Mr Roy later joined the BJP. While Mr Roy made a comeback in May this year, Mr Roy Burman is expected to follow in his footsteps soon.