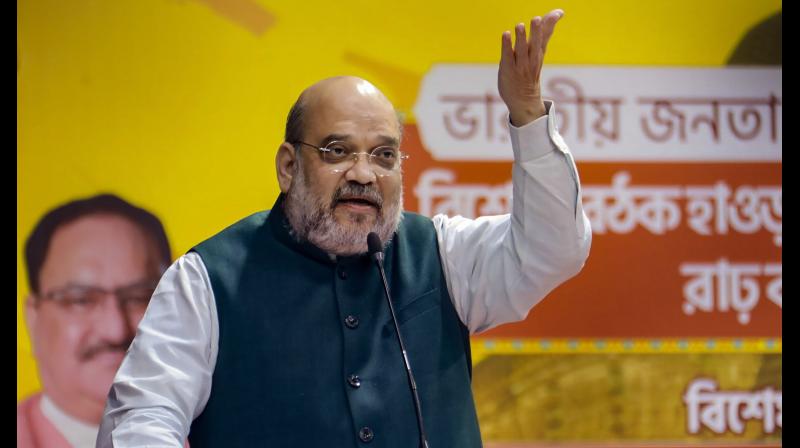 Kolkata: Kickstarting the BJP’s campaign for next year’s Assembly polls in West Bengal, Union home minister Amit Shah on Thursday declared that the “wheels of oppression” by the ruling Trinamul Congress on saffron party workers have rung the “death knell” of the Mamata Banerjee government to pave way for the BJP to come to power with a two-thirds majority.

Paying tribute to tribal icon Birsa Munda in Bankura on the first day of his two-day visit, Shah said: “The way the wheels of oppression have been run over the BJP workers here, I can clearly see that the death knell of the Mamata Banerjee government has been sounded. In the coming days, the BJP will come to power with a two-thirds majority here.”

Shah also set a target before the BJP to win more than 200 out of 294  Assembly seats in West Bengal next year.

"The 22 seats (read last Lok Sabha Election in West Bengal) were won courtesy to your hard work except four-five seats where we lost by few thousand votes. But now we will win more than 200 seats in the coming Assembly polls here. Whoever wants to laugh, let them do so. But we will do it following our strategy with dedication," he told the party workers at a meeting in Bankura.

He said: "Bengal is located on the boundary of the country. Its security is related to the internal security of the nation. I appeal to the people of Bengal to oust the present government to ensure the nation’s security, jobs for unemployed youth and relief to the poor from their plight."

Urging people to give the BJP a chance in power, Shah said that the BJP will work towards creating a ‘Sonar Bangla’ under Prime Minister Narendra Modi’s leadership.

Attacking the Trinamul supremo, the home minister said: “On one hand a dangerous public anger against the Mamata Banerjee government is visible, while on the other great respect full of hope towards Mr Modi is seen for a change in Bengal under his leadership.”

Stung by Shah’s blistering attack, Banerjee angrily said: “I can well understand the meaning of ‘Uthakar Phek Do’. Will it be good if I also ask for the same in reply? So better keep your own things to yourself. We respect all our legends. Bengal will not accept if some outsiders think they will break her nationalist feelings and destroy the state. Bengal never bows her head.” Referring to the BJP’s event, she alleged: “Some political parties are not abiding by the law for the Covid-19 pandemic. They are freely violating it.”

On the CM’s opposition to Central welfare projects, Shah had earlier claimed that all types of services, facilities and assistance sent by the Modi government were not reaching the people of Bengal. Focusing on Bankura, a tribal area, he said that neither the fund disbursed for their homes reached them nor the farmers were getting the yearly amount of Rs 6,000 allocated for them. The poor were being deprived of the Rs 5-lakh health insurance cover also, he added.

Banerjee hit back: “Like the state government cannot interfere in the Central government’s jurisdiction, the Centre also cannot do the same. But we have found people are being disturbed by Central agencies which are bypassing the state government.” Complaining about the Centre’s threats to some bureaucrats posted in her government on the transfer of their civil servant wives, she assured them of protection.