Panneerselvam arrived at the site around 9 PM and placed a wreath before sitting in meditation. 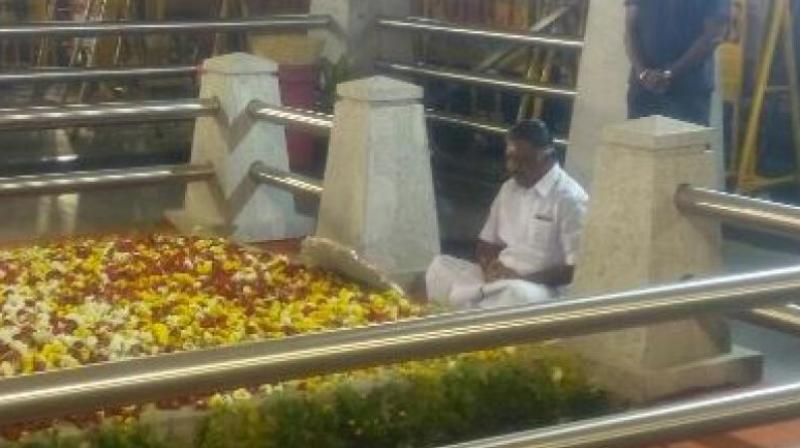 Panneerselvam arrived at the site around 9 PM and placed a wreath before sitting in meditation. (Photo: Twitter)

Chennai: Tamil Nadu Chief Minister O. Panneerselvam tonight took everyone by surprise when he sat alone in meditation at the burial site of Jayalalithaa, two days after he tendered his resignation paving the way for party chief V. K. Sasikala's elevation to the top post. Clad in a white shirt and dhoti, and sporting his trademark holy ash and kumkum, he sat on the floor inside the burial site enclosure in a traditional meditating posture.

After sitting for nearly 40 minutes, he opened his eyes, wiped tears and prostrated as a mark of respect and then circumambulated the burial site. He then prayed before walking away. Panneerselvam arrived at the site around 9 PM and placed a wreath before sitting in meditation.

A couple of plainclothesmen stood guard behind him as he quietly meditated by closing his eyes with folded hands. Shortly after word spread that Panneerselvam was sitting on meditation, crowds began to gather at the venue. Panneerselvam had on Sunday tendered his resignation from the post of Chief Minister citing 'personal reasons' and setting the stage for takeover of Sasikala, who was elected as Legislature Party leader earlier that day.