The BJP had won three seats and the Congress was not able to retain even a single constirtuency despite being in power for 15 consecutive years. 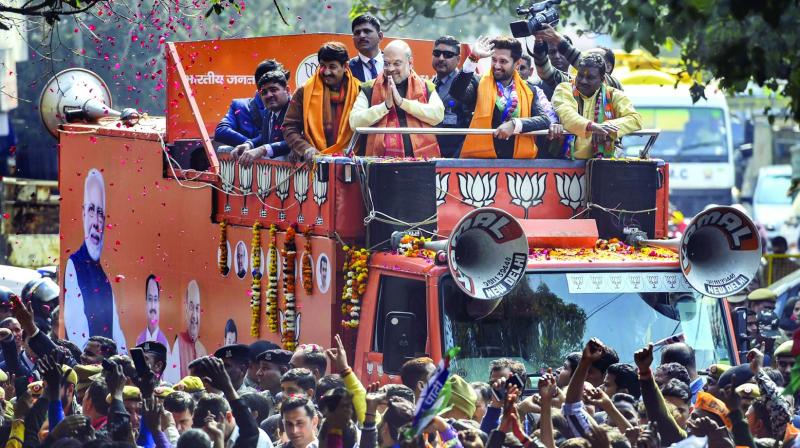 New Delhi: The high-voltage campaigning for the February 8 Delhi Assembly elections ended at 6 pm on Thursday with an aggressive blitzkrieg between the Aam Aadmi Party and the BJP, and the Congress leaving no stone unturned to make it a triangular contest. While the entire AAP leadership hit the ground, centring the campaign around the five years of work done by the Arvind Kejriwal government, the controversial slogan of “shooting dead traitors” were chanted again by BJP supporters at Union home minister Amit Shah’s roadshow in Hari Nagar. Targeting both the BJP and the AAP for not fulfilling their electoral promises, the Congress claimed that it would again spring a surprise like it did in the Assembly elections in neighbouring Haryana last year.
Soon after the campaigning came to an end, the AAP formed 272 teams in all the municipal wards of the city to keep a tight vigil after it received inputs that money and liquor were allegedly being distributed in some areas. AAP Rajya Sabha MP Sanjay  Singh said the party had filed a complaint with the Election Commission after some reports of many BJP MPs staying at different Assembly constituencies started doing the rounds.

With the slogan, “Achhe beetay 5 saal, lage raho Kejriwal”, which also formed the peg of the AAP campaign song, party candidates tried to impress upon voters that considering the work of their government in the fields of utilities, health and education, there was no better option other than to elect Arvind Kejriwal again as chief minister of Delhi. Mr Kejriwal also reiterated that the development seen so far was only a work in progress, and needed to be carried forward.

The BJP, which has put its full might to return to power in the city after 22 years, ended the campaign by appealing to voters to vote for the country’s security and good governance. Exuding confidence, Mr Shah, who led the party’s campaign from the front, claimed the BJP was going to form the state government by winning more than 45 seats. In 2015, the AAP had swept the polls by winning 67 of the Assembly’s 70 seats. The BJP had won three seats and the Congress was not able to retain even a single constirtuency despite being in power for 15 consecutive years.

Addressing three roadshows, Mr Shah alleged that the anti-CAA protests at Shaheen Bagh was a “joint venture” of the AAP and the Congress and claimed that the “tukde-tukde gang” would get a “shock” when the election results were declared on February 11. He said the BJP would emerge victorious in the election as the people will vote for country’s security, development and good governance.

Amid chants of “Jai Shri Ram” at his roadshow in Hari Nagar, a group of BJP supporters also raised “goli maaro” slogans. However, policemen asked them to stop. Mr Shah said: “Kejriwal and (Congress leader) Rahul Gandhi are worried that Shaheen Bagh should not be discussed. I want to ask them why the security of the country should not be an electoral issue?”

Sure of his party’s success in the Assembly polls, Congress media in-charge Randeep Singh Surjewala  said: “Some news channels were giving us just two seats in Haryana, but we won 31. It is going to happen again.” He said: “The AAP wants ‘Dangal Wali Delhi’ and the BJP wants ‘Dangon (riots) Wali Delhi’, while the Congress wants ‘Dil Walon Ki Delhi’.”

Terming the BJP, which is in power at the Centre, and the ruling AAP in Delhi as “Jhoothon ki Sarkar aur Jhoothon ke Sardar”, Delhi Congress president Subhash Chopra accused them of failing in areas of health, pollution mitigation, education, clean drinking water supply and public transport in the national capital. He said Mr Shah has “panicked” as he feels this time the BJP may not win more than the three seats it had won in the 2015 Delhi Assembly polls.