They said documents seized during the searches were being scrutinised in detail. 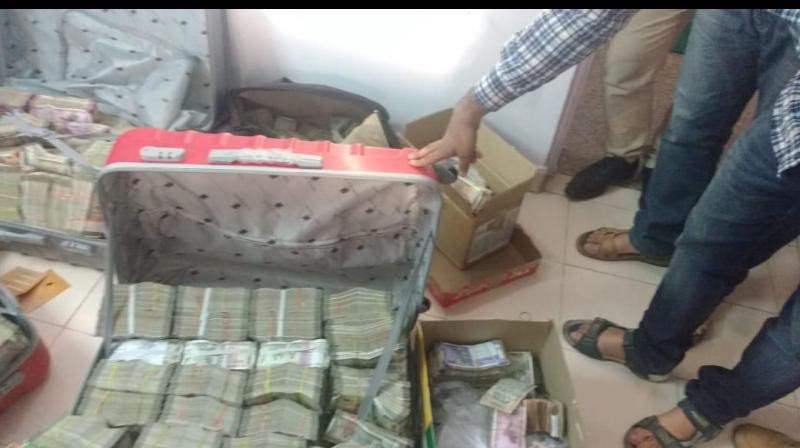 The raids were conducted by a team of officials, who arrived from Delhi, at Kakkad's residence in Vijay Nagar area here and other places associated with him, sources in the I-T department said. (Photo: Twitter/ ANI)

The raids were conducted by a team of officials, who arrived from Delhi, at Kakkad's residence in Vijay Nagar area here and other places associated with him, sources in the I-T department said.

They said documents seized during the searches were being scrutinised in detail. Further details were awaited. Kakkad, a former Madhya Pradesh police officer, was appointed OSD to Nath after the Congress-led government came to power in the state last year.

A team of about 200 I-T department and police officers swooped on these premises at around 3 am and some undisclosed cash has been recovered till now, they said.

They said locations in Indore, Bhopal and Delhi (Green Park) are being raided and those being searched include Nath's former OSD Pravin Kakkar, former advisor Rajendra Miglani and executives linked to his brother-in-law's firm Moser Bayer and his nephew Ratul Puri's company.

Both Kakkar and Miglani had resigned from their posts just before the Lok Sabha polls were declared.

The searches are linked to suspected movement of hawala money during the ongoing polls season and tax evasion, they said. Ratul Puri was last week grilled by the Enforcement Directorate in Delhi in connection with the Rs 3,6000 AgustaWestland helicopters purchase probe.

He had earlier served as OSD to former Union minister Kantilal Bhuria during the UPA regime. Kakkad's family is associated with a number of businesses, including hospitality.

Reflecting the widening cracks in the ruling coalition, Kumaraswamy said he was relying "only on the JD(S) MLAs, MLCs and the sitting member of parliament L R Shivarame Gowda (in Mandya)."

Speaking to reporters in Udupi, the Chief Minister said he did not depend on the alliance partner, Congress in Mandya.

"Some Congress leaders are working and some are not working (in Mandya), but I am not upset with that. There is a section out to finish me off by defeating Nikhil Kumaraswamy. However, they don't have the support of the local people there," Kumaraswamy alleged.

He was responding to a query about the squabbling among coalition partners -- JD(S) and Congress.

"I have eight MLAs (in Mandya Lok Sabha constituency), three MLCs and the sitting Lok Sabha member (L R Shivarame Gowda) are there.. They will work.. I won't blame anybody."

Noting that the situation was 'adverse' for JDS in Mandya while there was reported discord among coalition partners in Tumakuru and Hassan also, he, however, said, "We will not let down the candidates of our alliance partner."

The outburst was against the 'hostility' of Congress in Mandya and Hassan, the two constituencies where former prime minister H D Deve Gowda's grandsons Nikhil Kumaraswamy and Prajwal Revanna are contesting the Lok Sabha election.

Reacting to film actress Sumalatha Ambareesh's accusation that the JD(S) was playing 'mischief' in Mandya, the chief minister retorted it was she who has been running a negative campaign.

He also refuted her charge that the JD(S) fielded her three namesakes.

"How can I stop anyone from contesting the election? Kumaraswamy contended.

Sumalatha, the widow of popular Kannada actor and former MP from Mandya Ambareesh, is giving a tough time to Nikhil with the support of BJP and some disgruntled Congress and JD(S) leaders.