Voting was held in 1.5 lakh polling stations across 475 Assembly seats in the four states and the Union territory of Puducherry 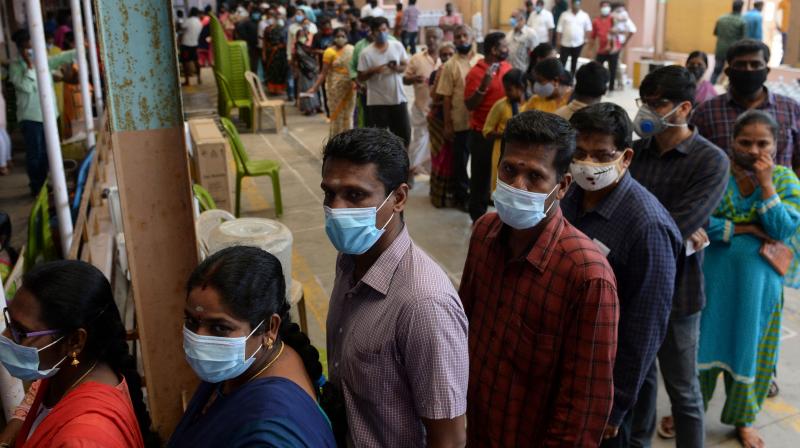 Voters stand in a line to cast their vote outside a polling station during Tamil Nadu state legislative election in Chennai on April 6, 2021. (Arun SANKAR / AFP)

New Delhi: Barring few incidents of violence in West Bengal’s Phase 3 vote, polling in that state as well as in Kerala, Tamil Nadu, Puducherry and for the third phase in Assam were held peacefully, the Election Commission said on Tuesday evening.

Five candidates, including two women, were assaulted, while clashes between rival political groups erupted during the third phase of polling in West Bengal on Tuesday, that saw a polling percentage of 77.68, while in Assam’s third phase 78.94 per cent of voters exercised their franchise.

Elections in Kerala, Tamil Nadu and Puducherry were held in a single phase.

In Kerala the polling was 73.58 per cent as 2.74 crore voters exercised their franchise for the Assembly elections when polling drew to a close at 7 pm. In Tamil Nadu, the voter turnout crossed 63.47 per cent as polling ended peacefully, while in Puducherry it was 77.90 per cent.

“To ensure inclusive and accessible elections, the EC has extended the option of postal ballot facility to PwDs, senior citizens above the age of 80, Covid-19 suspect or affected persons and persons employed in essential services. The observers at the ground level oversaw that proper arrangements for facilitation were made available for these voters,” EC officials said. The elections saw over nine lakh persons with disability casting their votes while over 21 lakh voters over 80 pushed the button in VVPAT machines.

EC officials said that as per the commission’s instruction police officials including CAPF personnel have been told not to enter the polling booth unless required by the presiding officer due to law and order problems. “It is the standing instruction of the commission that outsiders will not be allowed in the areas of poll-going Assembly constituencies during the silence period -- 48 hours before the end of polling. The commission had reiterated this instruction in the briefing of DEOs and police officials. These guidelines were strictly and rigorously followed,” the EC said.

During the ongoing elections till this phase, record seizures of Rs 947.98 crores has already been made from the five states/UT. The seizures include cash, liquor, narcotics, freebies, etc, and is over 4.198 times more than the total combined seizures of Rs 225.77 crores in general elections and legislative elections in 2016.

“The commission has been laying specific emphasis on inducement free elections and curbing the malaise of undue money power, liquor, freebies. For effective monitoring a total 4,606 flying squads and 4,670 static surveillance teams were operationalised to check the movement of cash, liquor, drugs and freebies in these states/UT closely supervised by DEOs, expenditure observers in districts and special observers. A total 19 Air Intelligence Units of IT department are also at different stations in Assam, West Bengal, Kerala, Tamil Nadu and Puducherry,” the EC said.