Congress, others should put house in order: Sitaram Yechury 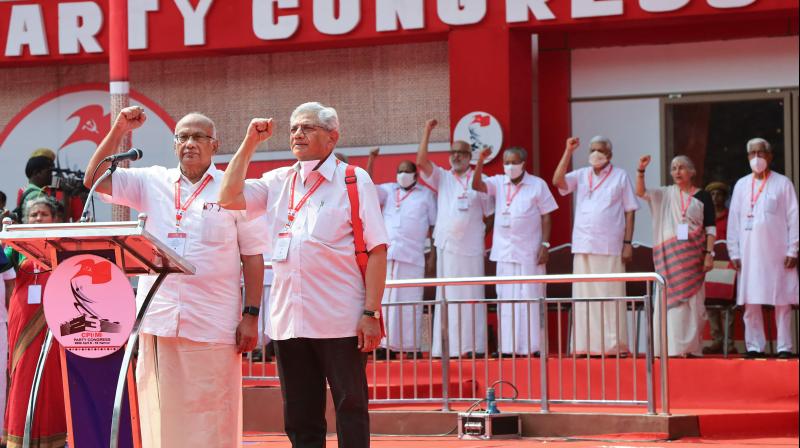 Thiruvananthapuram: The CPI(M) on Wednesday appealed to all secular parties to form the broadest possible front to defeat the BJP electorally and fight its Hindutva agenda, which was dividing the country on communal lines.

Inaugurating the CPI(M) 23rd party congress in Kerala’s Kannur district, party general secretary Mr Sitaram Yechury said all political parties that swear by secularism should “rise up to the occasion and come together to discharge this patriotic duty”. He added: “The Congress, along with some regional parties, must set their houses in order and decide where they stand in safeguarding the secular and democratic character of the Indian republic,” he said.

Mr Yechury said every single fundamental pillar of the Constitution --  secular democracy, federalism, social justice and economic sovereignty -- were under severe assault today. “Even while ruining the lives of the majority of people, undermining the fundamentals of the Constitution and the independence of independent institutions, the BJP-RSS, we must recognise, has succeeded in creating an overarching Hindutva identity in our country. This is their mainstay and they are polarising Indian society by sharpening communal polarisation, spreading hate and encouraging violence,” he said.

The CPI(M) general secretary said implementation of the fascistic RSS agenda of Hindu Rashtra required a unitary state structure, which was completely contradictory to the federal state structure under the Indian Constitution. To achieve this objective, he said, the BJP government was undermining the secular, independent authority of every single institution created under the Constitution, beginning with Parliament.

“Laws are made in Parliament without any discussion. The judiciary, the Election Commission, CBI, ED… the independence of each one of these institutions is being compromised in a determined attempt to aggressively carry forward their agenda. While doing this they are paying scant regard to the problems faced by the common man. No relief is being granted. It is the fourteenth time in the past few days that the prices of petrol and diesel have been increased. Inflation is galloping,” the CPI(M) leader pointed out.