Many in the party blamed the power struggle between Akhilesh and his uncle Shivpal for the Samajwadi Party's dismal performance. 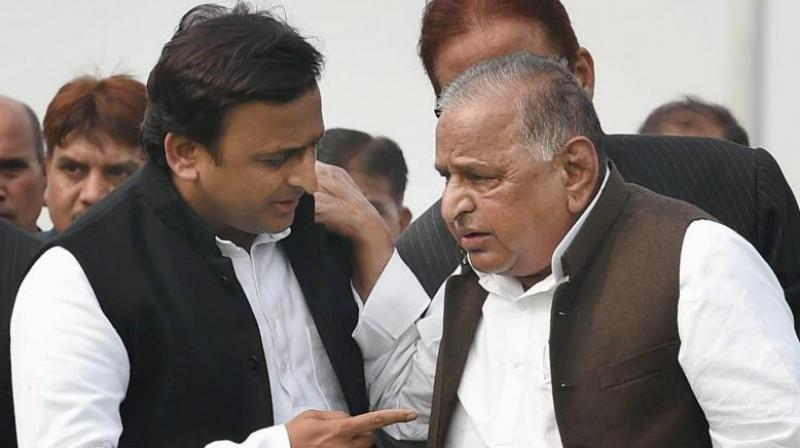 Mainpuri: Samajwadi patron Mulayam Singh Yadav today blamed the alliance with the Congress for the 'poor' state of the party and said efforts should be made to strengthen the SP.

He said though the Congress left no stone unturned to 'ruin' his life, his son Akhilesh Yadav forged an alliance with the party in the run up to the assembly polls.

"Alliance with Congress is responsible for the present poor state of the party. I had advised Akhilesh not to go ahead with it but he did so. The SP is itself responsible for its defeat and not the people of the state", he told reporters here.

Mulayam was here to unveil a statue of martyr Dharmendra Yadav in Junesa village in Karhal area here. Attacking the Congress further, Mulayam said, "Congress left no stone unturned to ruin my life. It lodged cases against me and Akhilesh forged alliance with it".

To a question on his brother Shivpal Yadav deciding to form a new front, he said efforts should be made to strengthen the Samajwadi Party.

Shivpal, who retained the Jaswantnagar Assembly seat during the recent elections, has said that a secular front would be formed if Akhilesh Yadav did not hand over the reins of the party back to his father Mulayam in three months.

On Shivpal Yadav's comment terming Ramgopal Yadav as 'Shakuni', Mulayam said, "Whatever Shivpal said is true. Attempts were made to ensure his defeat and money was also spent for it".

The SP patron also attacked Prime Minister Narendra Modi and dubbed him as a 'liar'.
"Modi had lied to the people and promised Rs 15 lakh in every account but even Rs 15,000 was not given," he said. The Samajwadi Party had witnessed a bitter feud between uncle Shivpal and nephew Akhilesh in the run up to the Uttar Pradesh Assembly polls.

Many in the party blamed the power struggle between Akhilesh and his uncle Shivpal for the Samajwadi Party's dismal performance.

The Samajwadi Party contested the polls under Akhilesh's leadership but suffered a humiliating defeat at the hands of the BJP.

Mulayam had earlier blamed Akhilesh for the Samajwadi Party's poor performance in the Uttar Pradesh Assembly elections and said that his son had insulted him. The SP tally in the assembly elections has come down to 47 from 227 in the 403-member House.

Following a bitter feud between the father and the son, Akhilesh had snatched reins of the party from Mulayam and their fight also reached the Election Commission.