The safron party has set up 72,000 booths across Bihar where the PM's speech will be streamed 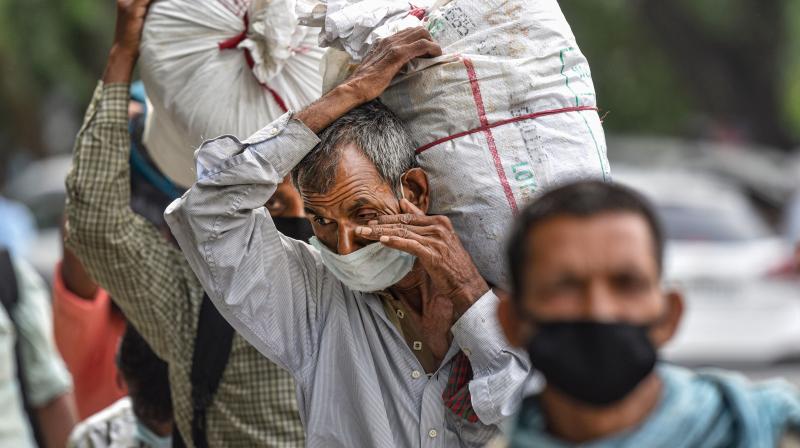 Workers traveling to Bihar wait to board a bus to reach the railway station where they hoped to catch a train to Bihar. (PTI)

New Delhi: Narendra Modi is likely to launch the BJP’s campaign next week for the upcoming Bihar Assembly polls but it will be a virtual rally, titled Bihar Jansamvad. The party has made arrangements at more than 72,400 booths in  all the 243 Assembly segments to hear the PM speak.

All ears will be cricked to hear how the Prime Minister addresses the issue of guest workers’ plight due to the nationwide lockdown that he imposed on March 25, which left millions of workers jobless.

Both Nitish Kumar-led NDA government in Bihar and the central government have been facing flak over the issue as lakhs of the state’s residents have returned from other states after facing severe hardships.

Modi’s speech will also set the tone and tenor for the BJP’s poll campaign at a time when the Covid-19 pandemic has hit the economy and employment severely.

With the virtual and digital mode now the new normal for political parties to connect with cadres and people due to social distancing guidelines, a maximum of 50 people will be allowed at the  venues where Modi’s virtual rally will be streamed.

“We have made arrangements at more than 72,400 booths across the state, which we have divided into 1,099 mandals so that social distancing measures are followed properly. Our technical teams are all geared up for these virtual rallies and our karyakartas will be using social media and digital modes to disseminate information regarding these rallies to the people,” said BJP’s Bihar media in-charge, Ashok Bhatt.

Union home minister Amit Shah will address a virtual rally on Sunday and BJP president J.P. Nadda is also scheduled to address one next week in the poll-bound state.

The crucial Assembly polls in the state are scheduled anytime in October-November this year amid growing apprehensions over the Covid-19 situation at that time.

It could be recalled that former BJP president Shah, during a rally in the state in January this year, clarified that the NDA will go to polls under Kumar’s leadership, putting to rest the otherwise contentious issue between the JD(U) and the BJP cadres.