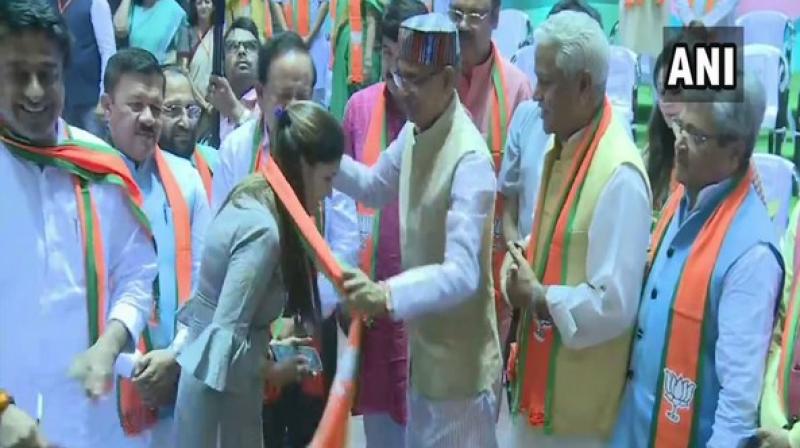 The newly-inducted member of the Bharatiya Janata Party, Haryanvi dancer and singer Sapna Choudhary, said that she did not think twice before joining the party as she is "highly impressed" by its work.

"There was no need to think twice. I was highly impressed by BJP's work. BJP is a great party and I have taken its membership," Choudhary said amidst chants of Bharat Mata ki Jai.

On being asked about her plans, she said she was firmly "rooted" to the ground indicating she would work for the common man.

She refused to say anything further, stating that she had been directed by the party "not to respond" to the media for some time.

Chaudhary joined BJP at an event of the party's newly launched membership drive at Jawaharlal Nehru Stadium in Delhi.

In March, Chaudhary had made headlines after Uttar Pradesh Congress chief Raj Babbar tweeted a picture of the singer along with Priyanka Gandhi Vadra and welcomed her into the party. However, she categorically denied having joined the party.

Soon after her denial, BJP came out in support of Chaudhary and hit out at the Congress claiming that the party used her old pictures to spread the news that she has joined Congress and will contest from Mathura against BJP candidate Hema Malini.

"Without Sapna's consent, Congress has used her old pictures to spread the news that she has joined Congress and will contest from Mathura. She is the biggest superstar and Congress has stooped to such level, which was not expected under Priyanka Gandhi Vadra," Tiwari had told ANI.

Tiwari had also said that he would be "happy" if Chaudhary joins BJP.

The Haryanvi dancer shot to fame after her stint in 'Big Boss'. She was earlier in the news for attempting to committing suicide.