Watch! Rahul Gandhi savours dosa in Patna after getting bail in defamation case

Rahul, the lawmaker from Kerala's Wayanad, was given bail in defamation case filed by Sushil Modi over his 'Saare Modi Chor Hai' remark. 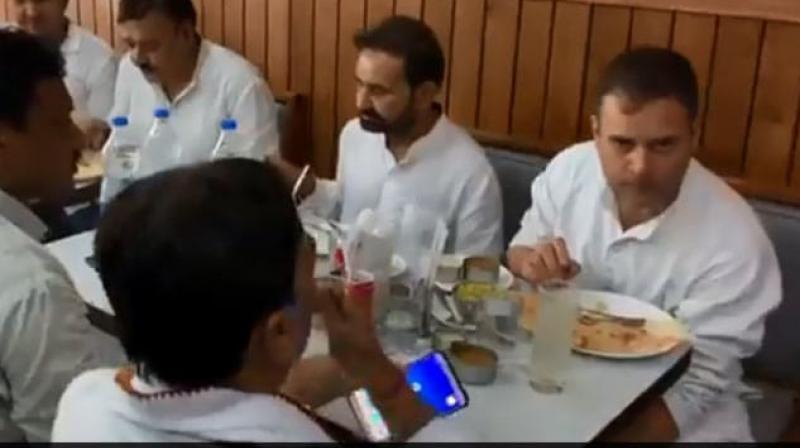 Patna: Congress leader Rahul Gandhi on Saturday visited a restaurant in Patna's Maurya Lok Place after a Patna court granted him bail in a defamation case.

The recently resigned Congress party president feasted on dosa for lunch at the restaurant and then left for the Patna Airport.

The 49-year-old leader, who is a lawmaker from Kerala's Wayanad, was given bail in the defamation case filed by Bihar Deputy Chief Minister Sushil Modi over his 'Saare Modi Chor Hai' remark.

Addressing a rally in Karnataka during the Lok Sabha elections in April, Gandhi had reportedly stated that all thieves had Modi as their surname- referring to Prime Minister Narendra Modi, bank-fraud accused Nirav Modi and former Indian Premier League IPL commissioner Lalit Modi.

The Patna court ordered the bail for Gandhi on a surety amount of Rs 10,000.

"Those who stand against the ideology of RSS and Narendra Modi, they face attacks and court cases. My fight is to save the Constitution and stand with poor, farmers and labours of India, that is why I am here today. I will stand with the voice of India which was being suppressed," Gandhi, the Wayanad MP told reporters on Saturday.