TMC plans to issue a showcause notice to her after denouncing her comments on Goddess Kali, which has led to a major controversy 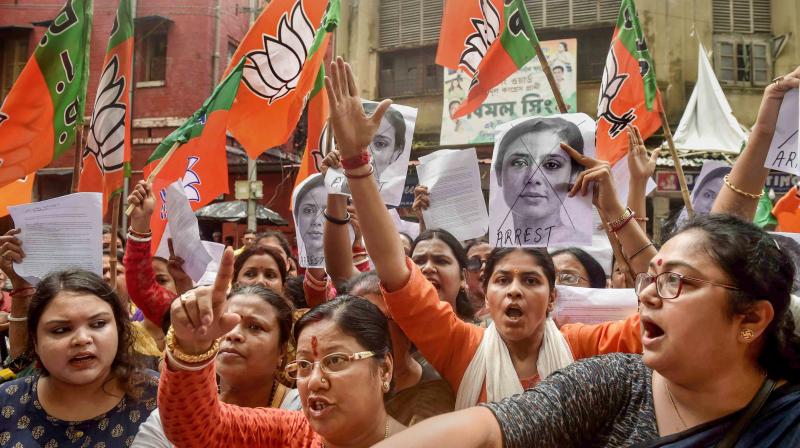 Kolkata: West Bengal’s ruling Trinamul Congress has started keeping a distance from its outspoken MP Mahua Moitra, with a plan to issue a showcause notice to her after denouncing her comments on Goddess Kali, which has led to a major controversy and earned her criticism and an FIR being filed against her in BJP-ruled Madhya Pradesh.

On Tuesday, the gutsy Lok Sabha MP who represents Krishnanagar, in Nadia district, when asked about the uproar over the depiction of the goddess as smoking in the poster of an upcoming film Kaali, said: “How do you view your God? If you go to Bhutan or visit Sikkim, when people do puja in the morning, they give whisky to God. Now at some places in Uttar Pradesh, if you go there and tell them you are giving whisky or something (like that) as prasad to God, they will say: “Oh my God, that's blasphemous. Kali to me is a meat-eating, alcohol-accepting goddess.”

As the BJP attacked her, the TMC tweeted in the evening: “The comments made by @MahuaMoitra at the #IndiaTodayConclaveEast2022 and her views expressed on Goddess Kali have been made in her personal capacity and are NOT ENDORSED BY THE PARTY in ANY MANNER OR FORM. All India Trinamul Congress strongly condemns such comments.”

But Ms Moitra appeared undeterred and unfollowed the TMC on Twitter. However, she still follows her party supremo and chief minister Mamata Banerjee on Twitter.

Retaliating against the BJP, she said in a series of tweets: “To all you Sanghis… lying will NOT make you better Hindus. I NEVER backed any film or poster or mentioned the word smoking. Suggest you visit my Maa Kali in Tarapith to see what food & drink is offered as bhog. Joy Ma Tara. Jai Ma Kali! The goddess Bengalis worship is fearless & non-appeasing. Bring it on BJP! Am a Kali worshipper. I am not afraid of anything. Not your ignoramuses. Not your goons. Not your police. And most certainly not your trolls. Truth doesn’t need back-up forces.”

The TMC is now planning to pull up Ms Moitra and seek her explanation in a damage control exercise as an FIR under Section 295A (deliberate and malicious acts intended to outrage reli­gious feelings) IPC was filed against her in Bhopal on Wednesday after Madhya Pradesh CM Shivraj Singh Chauhan accused her of hurting the sentiments of the Hindus and vowed there would be no tolerance of any insult to Hindu deities.

In Kolkata, BJP women’s wing leaders demonstrated outside Bowbazar police station and lodged complaints against Ms Moitra. Leader of the Opposition Suvendu Adhikari demanded Ms Moitra’s arrest and also threatened to move the court if no action was taken against her.