He also complimented the members for the Bills and resolution on Jammu and Kashmir. 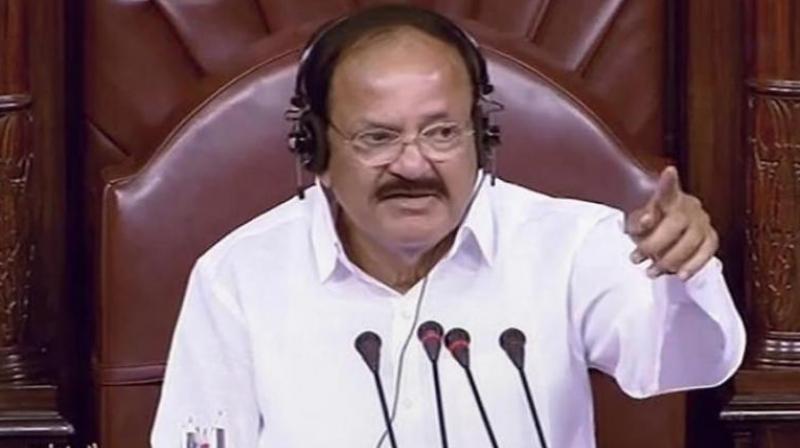 Naidu said the turn around during this session also comes out clearly when viewed against the passage of a total of only 33 Bills during the last five sessions (244th to 248th) put together.(Photo: File)

New Delhi: Rajya Sabha Chairman M Venkaiah Naidu on Wednesday said that after a long time the Upper House witnessed "narrowing of divergence" in terms of Bills passed by both the Houses of Parliament and termed the 249th session as "best" in the last 17 years.

In his valedictory address before adjourning the Rajya Sabha sine die, he also hailed the Treasury as well as the Opposition benches for their cooperation in the passage of 31 Bills during 35 sittings.

"After a long time, this House witnessed narrowing of divergence in terms of Bills passed by both the Houses of Parliament during this session," he said.

He said at the start of this session, he had invited the attention of the members to the need for Parliament to function in a spirit of synergy between the two Houses.

He said with the House in August turning more "productive and purposeful", the negative coverage in the media has almost vanished.

"In terms of legislative output, with the passage of 31 Bills during these 35 sittings, this session is the best in the last 17 years accounting for 52 sessions. 35 Bills were passed during the 197th session in 2002," he said.

The Bills passed during the session, he said, were very significant in terms of their impact on the social and economic landscape of our country.

"Passing of the Muslim Women (Protection of Rights on Marriage) Bill, widely known as the Triple Talaq Bill is the most far-reaching social reform legislation in the last 60 years since the passage of Hindu Code Bills. Though there were some differing perspectives on some provisions of this Bill, the broad spirit of unity with which this House cleared this bill is praiseworthy," he said.

He also complimented the members for the Bills and resolution on Jammu and Kashmir.

"At the end of it, all of you have reasons to go back with smiles on your faces having scripted the much-needed turn around in the functioning of this august House. I wholeheartedly compliment all of you for the same," he said.

Naidu said the turn around during this session also comes out clearly when viewed against the passage of a total of only 33 Bills during the last five sessions (244th to 248th) put together.

"In terms of utilisation of the available time of the House, the productivity of the house is 104.92 per cent which has made this session the best in the last 5 years since 2014 and coming after 17 sessions," he said.

He, however, said no business was allowed to be transacted for a full two and a half days besides occasional disruptions.

He said a total of 19.12 hours of precious time of the House was lost on this count.

"However, the House sat beyond the scheduled time on 19 days and gained around 28 hours," he added.

"Having reached a new normal in this session, the task now before all of us is to sustain it without getting back to old ways," he said.

He said with 35 sittings, this session is the longest in the last 14 years. The previous record being 38 sittings during the 204th session in 2005.

"The Council of States has lived up to its mandate of defending the federal spirit of our polity by standing up for the rights of the States. This has come out on three occasions during this session and the credit for this goes to both the Opposition and ruling sections," he said.

The session, which began on June 20, was to conclude on July 26. But it was extended till August 7.