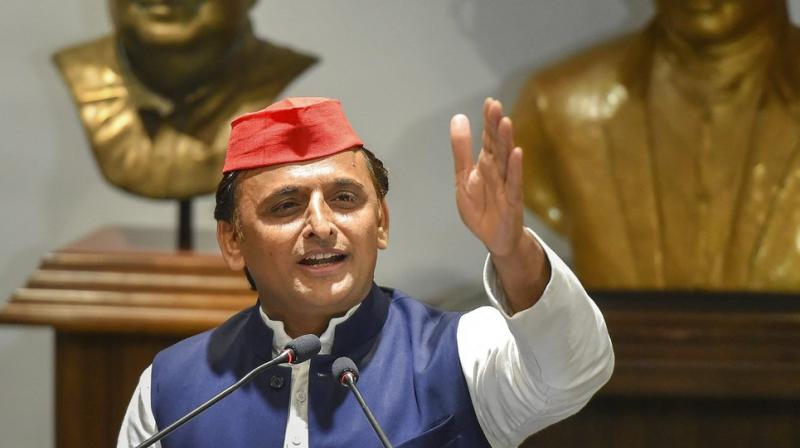 “The Congress has made us wait long enough. The elections are being announced and we cannot wait any longer. We will, however, talk to the BSP about an alliance in Madhya Pradesh,” said Akhilesh Yadav. (Photo: PTI)

Lucknow: The Congress could be in for trouble in both Madhya Pradesh and Rajasthan as its move to join hands with the Samajwadi Party (SP) and the Bahujan Samaj Party (BSP) to put up a united fight against the ruling BJP has fizzled out. After the BSP decided earlier this week to go alone in Assembly elections in these two states, it was the Samajwadi Party’s turn on Saturday to dump the Congress.

The Akhilesh Yadav-led party ruled out an alliance with the Congress in Madhya Pradesh for allegedly delaying a deal and failing to show “large-heartedness” in seat-sharing.

The Congress, which had tried to play down the BSP’s snub on October 3, said in New Delhi that it had not been planning an alliance with the SP in Madhya Pradesh.

“The Congress has made us wait long enough. The elections are being announced and we cannot wait any longer. We will, however, talk to the BSP about an alliance in Madhya Pradesh,” said Akhilesh Yadav.

Though the SP has no MLAs in Madhya Pradesh and Rajasthan and the BSP has four MLAs in MP and three in Rajasthan, their decision to fight the elections without any understanding with the Congress will convert the contest in both the states into a triangular tussle that may benefit the ruling BJP.

A united Opposition against the BJP, led by the Congress and complemented by the SP’s appeal to Muslim voters and the BSP’s to dalits, would have given the saffron party nightmares.

During the last Assembly polls in MP, the combined votes polled by both the Congress and the BSP were more than that of the BJP.

The BSP has considerable influence in northern Madhya Pradesh and pockets of Scheduled Castes account for 16 per cent of the state’s population, though, over the past few years the dalit vote bank in the state has shifted to the BJP.

In Rajasthan, the Scheduled Caste population is nearly 18 per cent.

Mr Yadav said that the Congress had not discussed its plans for Madhya Pradesh Assembly elections with him. “We will not wait any longer. We have already allied with the Gondwana Gantantra Party and plan to talk to the BSP. The Congress should learn to show some large-heartedness if it wants to defeat the BJP in 2019,” he said.

Mr Yadav also warned that the formation of Grand Alliance for the Lok Sabha elections may also suffer in case there is any delay in talks. On October 3, Maya-wati had said that her party will contest the Assembly polls in MP on its own or in alliance with a regional party. She had said Sonia Gandhi and Rahul Gandhi wanted an alliance but some “selfish” senior leaders in their party were out to foil any understanding.

Madhya Pradesh will vote to pick a new 230-member Assembly on November 28 and results will be declared on December 11. In the current Assembly, the BJP has 165 MLAs and the Congress has 58 legislators.

The SP is trying to increase its footprint in the country states and is keen to contest polls in MP, Rajas-than and Chhattisgarh.

A senior party functionary blamed the Congress for not taking the initiative to bring all like-minded parties on one platform. “It is the duty of the Congress because it is a big party. When our president talks of large-heartedness, he means that the Congress should willingly share seats with other parties,” he said.

Meanwhile, with a triangular contest inevitable in these states, it just could be advantage BJP, particularly in Madhya Pradesh. The Congress was expecting to strike up an alliance with both the BSP and the SP to prevent any division of votes.

In Rajasthan, however, a confident Congress state unit had been consistently opposing any tie-up with the BSP. Despite the Congress confidence, the dalits play a dominant role in the state’s Shehawati region. There are also pockets of dalit influence in Bharatpur area.

Voting in Rajasthan will be held on December 7 and the results will be declared on December 11. In the current 200-member Assembly, the BJP has 163 legislators and the Congress has 21 MLAs.