US slams China for Corona, Indo-Pacific tensions at Quad meet 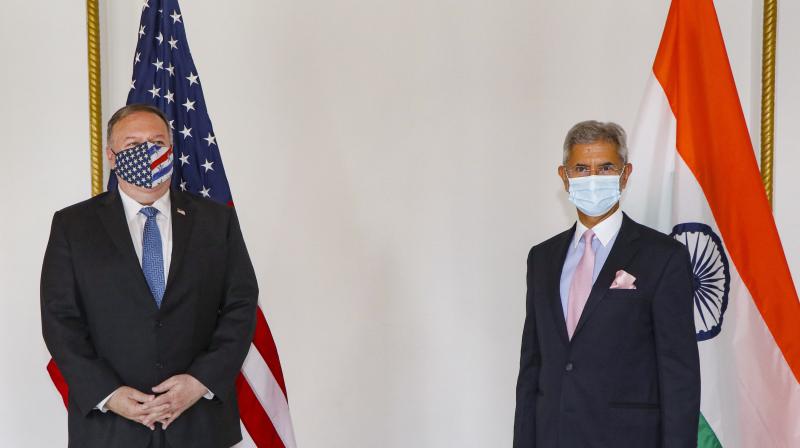 EAM S. Jaishankar with US secretary of State Mike Pompeo at a meeting in Tokyo. — PTI photo

In a development that is being watched closely by Beijing, foreign ministers of the “Quad” countries — India, the United States, Japan and Australia — met in Tokyo on Tuesday, with US secretary of state Michael R. Pompeo blasting China’s “exploitation, corruption, and coercion” in “South (China Sea), the East China Sea, the Mekong, the Himalayas and the Taiwan Straits”. The US secretary of state also openly accused China of initially “covering up” the Coronavirus pandemic in Wuhan and “silencing the very brave Chinese citizens who raised the alarm”.

Representing India, external affairs minister S. Jaishankar, in a veiled jibe at China, told the meeting that “as vibrant and pluralistic democracies with shared values, our nations have collectively affirmed the importance of maintaining a free, open and inclusive Indo-Pacific and that “we remain committed to upholding the rules-based international order, underpinned by the rule of law, transparency, freedom of navigation in the international seas, respect for territorial integrity and sovereignty and peaceful resolution of disputes”.

EAM Jaishankar further said, “Our objective remains advancing the security and the economic interests of all countries having legitimate and vital interests in the region. It is a matter of satisfaction that the Indo-Pacific concept has gained increasingly wider acceptance.”

The Quad meeting is significant given the aggressive Chinese military posturing and tensions in the past few months in the South China Sea, Ladakh and the Taiwan Straits. It is being seen by observers as sending a strong message to Beijing that it will not be allowed to browbeat its neighbours, including India, Japan and the ASEAN nations. The Quad is officially an arrangement that aims to preserve a “rules-based order” in the Indo-Pacific region.