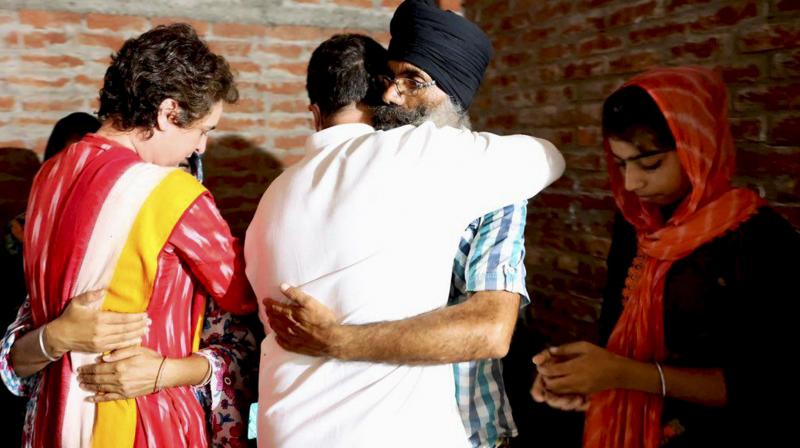 New Delhi/Lucknow: After a dramatic standoff with security personnel, Congress leader Rahul Gandhi was on Wednesday finally allowed to leave Lucknow airport to visit his sister Priyanka Gandhi Vadra, who was detained at a state guest house at Sitapur in Uttar Pradesh, to prevent her visiting Lakhimpur Kheri, where eight people had died and several others injured in the bloodiest clash since the farmers’ protests began over the three farm laws last year.

Soon after meeting his sister, the AICC general secretary in charge of the poll-bound state who along with some party colleagues were released from detention on Wednesday, the two along with several other leaders straightaway headed to Lakhimpur Kheri to meet the victims’ families.

The Supreme Court has, meanwhile, taken suo moto cognisance of the violent incident and the matter will come up for hearing Thursday before a bench comprising Chief Justice N.V. Ramana and Justices Surya Kant and Hima Kohli.

At Lucknow airport, a high-voltage drama unfolded as Mr Gandhi turned down the request of the state police to travel in a government vehicle as he insisted on travelling in his own private car. “Who are you to arrange my transport? I want to leave in my car," the Congress leader told the security personnel who surrounded him after he landed at the airport. “They are up to some mischief. Cent per cent,” he told reporters.

As Mr Gandhi, Punjab CM Charanjit Channi and Chhattisgarh CM Bhupesh Baghel stayed put at the airport, the police cordoned off the area with rope. “Let me leave! They are not letting me leave the airport. See this -- what kind of permission is this? See the UP government’s ‘permission’. I want to leave the airport but they are not allowing me to leave. Yeh scene dikhao acchhi tarah (show this scene properly),” Mr Gandhi said, turning to the media. “I am prepared to be here for 10 days, 20 days, whatever it takes...” he declared.

It was after about half an hour later that Mr Gandhi was finally allowed to leave the airport in his private vehicle. He, along with other party leaders, straightway visited his sister, who was released from detention.

Both Mr Gandhi and Ms Vadra travelled together in a car to Lakhimpur. Rajasthan Congress leader Sachin Pilot, who was travelling separately, was reportedly detained on his way to Lakhimpur Kheri.

Earlier in the day, the Congress leader addressed a press conference in New Delhi where he alleged there was “dictatorship”, not democracy, in India, with the farmers being “systematically attacked” and politicians not allowed to visit UP to meet the families hit by the violence in Lakhimpur Kheri. He alleged that a new type of politics was being played in UP where criminals were doing whatever they wanted to and were roaming freely while those who were seeking justice for the victims were being arrested.

There has been a growing demand from the Opposition parties that Union minister of state for home Ajay Mishra should resign as an FIR on charges of murder was lodged against his son Ashish over the violence at Lakhimpur. They criticised the government for not arresting his son even three days after the filing of the FIR.

In Bahraich, Gurvinder Singh, alias Gyaniji, one of four farmers killed in the violence, was cremated Wednesday morning after a second autopsy was conducted on him as demanded by his family. The family members of the 22-year-old, hailing from Moharia village, had earlier refused to cremate him, claiming he was shot dead but the autopsy report had no mention of it. They received support from farmer leader Rakesh Tikait and Punjabi singer Sonia Maan.

With the UP government agreeing to their demand, a second autopsy was done on Tuesday night by a team of experts from Lucknow, SP Sujata Singh said. Hours after this, Gurvinder Singh was cremated by his family members in his village in the presence of Mr Tikait, ADG (Gorakhpur) Akhil Kumar and senior police and civil officials, additional SP (rural) Ashok Kumar said.

District magistrate Dinesh Chandra Singh said the family members of Gurvinder Singh raised objections on the autopsy done earlier. “With the permission of the state government, it was done again and videographed as well,” he added.