In the previous two phases, the voter’s turnout was 54.26 and 54.05 per cent respectively. 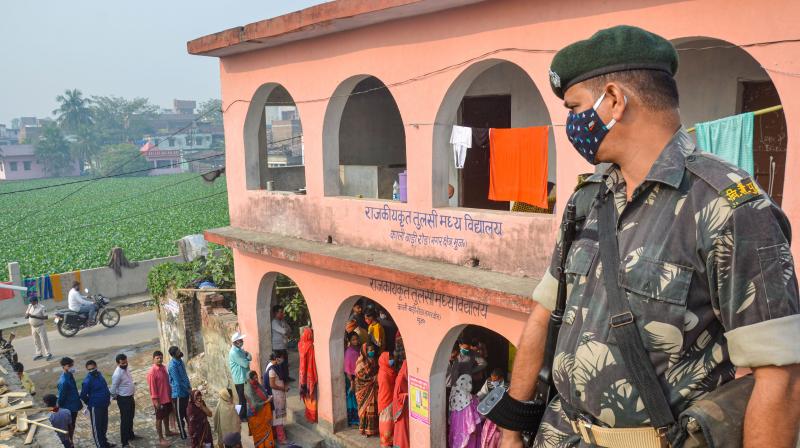 A security official keeps a vigil as voters stand in queues to cast their votes at a polling station during the third phase of Bihar Assembly Elections, in Muzaffarpur district, Saturday, Nov. 7, 2020. (PTI)

Bihar on Saturday recorded a voter turnout of around 55 per cent during the third and final phase of polls. The voting in this phase was held in 78 constituencies spread across 15 districts of north Bihar, Seemanchal and Kosi region of the state.

As per an assessment, like the previous two phases, the final phase too is considered crucial for the ruling NDA led by JD(U) and the grand alliance comprising of RJD, Congress and Left parties.

However, the entry of parties like LJP, Asaduddin Owaisi’s AIMIM and Pappu Yadav’s JAP has made the fight triangular in most of the seats.

Chirag Paswan, who had pulled out of the NDA citing ideological differences with Chief Minister Nitish Kumar ahead of seat-sharing arrangement, emerged as a third force and fielded candidates on 42 seats, mostly against the JD(U) and Hindustani Awam Morcha during the third phase of polls.

Political analysts believe that the NDA, as well as the grand alliance, are also set to witness a tough fight in the Muslim dominated Seemanchal region where AIMIM has a visible influence and has fielded 15 candidates.

"Asaduddin Owaisi’s party AIMIM has a visible influence on some of the seats in the Seemanchal region. The party may cut votes and cause a major dent to the NDA as well as the grand alliance in this phase of polls," political observers said.

Similarly, Pappu Yadav’s JAP is also likely to make the contest tough for NDA and grand alliance in the Kosi region where Yadavs and Backwards are the deciding factors. Pappu Yadav has contested from Madhepura.

In the previous two phases, the voter’s turnout was 54.26 and 54.05 per cent respectively. The results for all three phases will be declared on November 10.

In all the three phases, the BJP took the campaign beyond local issues by speaking about the abrogation of Article 370 and Pakistan-backed terror. UP CM Yogi Adityanath took up Ram Temple in Ayodhya and triple talaq while addressing rallies.