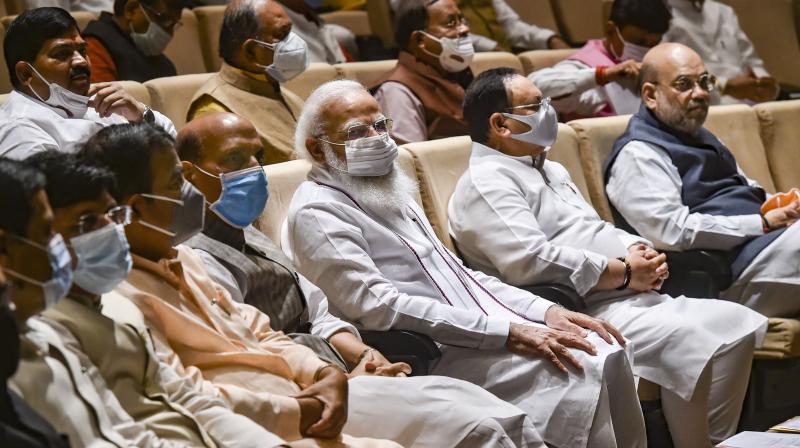 The BJP will hold the first meeting of its recently reconstituted national executive on Sunday where coming Assembly polls in five states will be on top of the agenda of the party leadership to discuss. (PTI file photo)

New Delhi: The BJP will hold the first meeting of its recently reconstituted national executive on Sunday where coming Assembly polls in five states will be on top of the agenda of the party leadership to discuss. Keeping in mind the Covid protocol, the meeting will also be attended virtually by some national executive members from respective headquarters of the party's state unit.

While BJP president J.P. Nadda will deliver the inaugural speech, Prime Minister Narendra Modi will give the concluding remarks where he is expected to give mantras to the party leaders and the cadre with an eye on the coming electoral battles.

The key organisational body of the ruling BJP will meet for the first time following the Covid-19 outbreak.

Addressing a press conference, BJP general secretary Arun Singh said that 124 national executive members, including the PM, Mr Nadda and many Union ministers, will attend the meeting physically while the members based in various states, including chief ministers, will join it virtually in line with the Covid protocol.

Mr Singh added that the Prime Minister's remarks would provide a way forward for the volunteers and supporters. Links to the programme will be provided to the state leadership to ensure that the message can be delivered to as many BJP workers as possible.

One political resolution is expected to be passed at the meeting, where the party leadership will also deliberate on organisational issue. The meeting will also pass a condolence message for Covid victims.

"Presentations, highlighting government schemes for the poor, will be on display. Apart from this, visuals of our volunteers working amid the pandemic and a clip on the administration of 1 billion vaccine doses would also be shown," Singh said.

At the venue of the national executive meeting, the party will hold exhibitions about the Modi government’s “Aatmanirbhar Bharat” programmes and pro-poor measures like providing free grains to the poor and the Covid vaccination exercise.